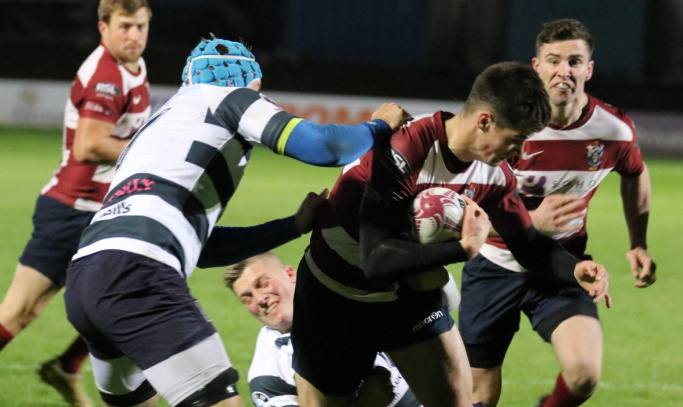 The Watsonians Super6 squad had a very useful first friendly hit out against Heriot’s on Friday night at Myreside.

With the new-look league starting in November, 25 of the 35 man squad announced last week got a run out under the watchful eye of coaches Fergus Pringle, Nikki Walker and Richard Snedden.

The match was played over three periods of 20 minutes to allow both teams to look at a number of players and combinations and, after an entertaining hour or so, the match ended 24-19.

A good start was made to the match by the home side, young centre Matthew Currie making a couple of good breaks and hooker Cal Davies going close to the opening try.

And the opening score did come in the 13th minute, a nice wide pass out to the left setting up winger Angus Guthrie to go in at the corner. Stand-off Lee Millar’s conversion missed and it was 5-0.

Currie, the Scottish Rugby Academy player, was then forced off with an injury to be replaced by Lomond Macpherson.

And try number two came in the 20th minute when centre Lewis Berg ran a great line to go over for the score. Skipper Millar converted to make it 12-0.

That was the score after the first period.

Midway through the second period Heriot’s scored an unconverted try down the blindside to make it 12-5.

Connor Boyle, the back-row who captained Scotland under-20 last term, then came on for ‘Sonians before Guthrie showed good power to go over for his second try. Millar converted for 19-5.

Heriot’s fought back again though and the second period ended 19-12 to the host after the visitors scored a well-worked try after a quick tap penalty.

In the third period, Watsonians lost second-row Finlay Simpson to the sin bin and Heriot’s took advantage to score a converted try and make it 19-19.

The team then lost replacement stand-off Ewan Fox to a yellow card and it was 13 v 15 for a spell.

With eight minutes remaining Simpson returned to the fray with the scores still tied.

Fox then came back on and, with the final act of the 60 minute match, the ball was looped over the top to the left wing and Guthrie scored his third of the night to finish things 24-19.

The team are next in action next Saturday in their second friendly at Stirling County with a 1.30pm kick-off.