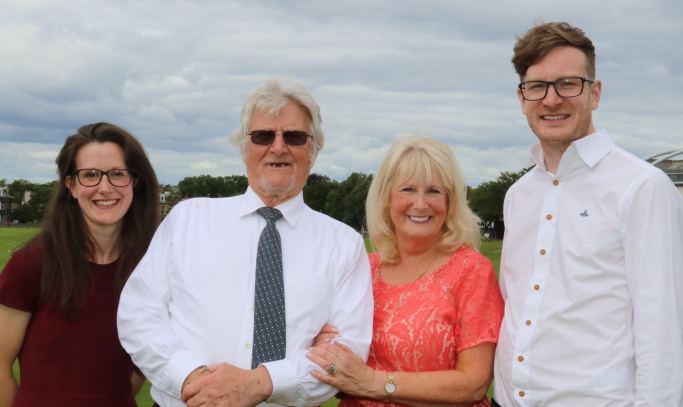 We catch up with club stalwart Stewart Robertson...

This year marks 30 years since Stewart Robertson became involved with WFC and the club is very grateful for all the hard work he has put in over the last three decades.

Anyone who has been a member at any time since 1991 will know Stewart, who turned 80 in 2020, because he is always keeping busy and trying to help the cause where he can.

He has also put in a power of work with the Watsonian Cricket Club, but how did his life in sport begin?

Having grown up in a farming family in Fife, Stewart played rugby a bit when he was at Bell Baxter High School in Cupar and the first rugby club he had any involvement with was Howe of Fife, but due to farming the time for sport was very limited.

Stewart, who preferred football growing up, joined the police force in Fife in 1959 aged 19 - “that curtailed my rugby as Saturdays off were a rarity” - before he transferred with work to Edinburgh in 1966.

In a rugby sense, between that year and 1991 he was involved with Edinburgh Wanderers, Edinburgh District, Lothian and Borders Police and beyond.

“I became involved with Wanderers through an old school friend David Whyte who was a Scotland internationalist,” Stewart said.

“I put in 25 years of service with Edinburgh Wanderers and my official role there was Team Attendant.

At that time Wanderers were one of the top teams in the country and played many of their home games on the international pitch. They also had a very good sevens record and as Team Attendant I was involved with their sevens wins at Melrose and went to the Middlesex Sevens at Twickenham.

“My first season there was 1966/67 and that was before the days when things like team physios and such like existed and my role involved a lot of work on matchdays. I was fortunate to do a day job which allowed flexibility in working hours.

“In the early years I was living in a flat in Merchiston Avenue and was friendly with some physios who were neighbours and they introduced me to David McLean.

“He was the first Scotland Team Physio if you like and at times in those days I even ran on with a bucket and sponge on international days at Murrayfield because the off field team, headed up by Team Doctor Donald McLeod [later President of Scottish Rugby], needed help.

“As sports medicine became more prevalent, The SRU started to run seminars on the Fridays before home internationals and it was great to be able to learn more from eminent orthopaedic surgeons and others who were involved in different sports.

“I was also involved with first aid training within the police, so a combination of work and rugby peaked my interest in dealing with - and treating - sports injuries. Dealing with an injured player on a muddy pitch, in pouring rain is quite different to treating someone in a medical room!

“In the 1970s, on top of my duties with Wanderers, I was asked to become involved with Edinburgh District and I got involved with police rugby in the 1980s.

“Edinburgh City Police had always had a strong rugby team and then after regionalisation - when it became Lothian and Borders Police - they got even stronger because there was a strong nucleus of players from the Borders and we became one of the top Police teams in the UK.”

All roads lead to Myreside

So, how did all roads lead to Myreside 30 years ago?

“My association with Watsonians started in season 1991/92,” Stewart recounts.

“In 1991 I retired from the police and my son Blair started to attend George Watson’s College.

“However, I had a relationship with the school that went way back to 1970 because at that time I was responsible for the general policing of the Morningside area, although funnily enough the boundary was Myreside Road!

“Anyway, I went along to training one night in 1991 and I was at the bar in the clubhouse when Alan Duncan started chatting to me.

“At the time he was Convenor of Selectors and Tom Kelly, father of current Vice-President Richard Kelly, was President.

“They were keen for me to become involved, but because I had retired from work and had already given 25 years to rugby, but I was reluctant at first.

“However, I became Team Attendant for the first XV and things just went from there.”

Stewart remembers the first match he worked at with the club being an away game under floodlights against Musselburgh while, for home games at the time, the medical room was a small one at the south end of the Myreside stand in an area which also served as the cricket indoor wicket.

He then took on a part-time job with the Bank of Scotland, but his commitment to the club did not waver.

“Dougie Buchanan was WFC President at the time and also worked at the bank and he asked me to become Team Secretary,” Stewart continues.

“That meant I was doing the Team Attendant and Team Secretary roles at the same time and the latter was a big job because there were midweek selection meetings at the time and Watsonians were putting out five, six and occasionally seven teams on a Saturday.

“The phone never stopped ringing on a Friday night while on a Saturday morning I had to help re-jig teams after late call-offs and such like before then undertaking my duties with the first XV, which could involve away trips to the Borders, Glasgow or Aberdeen.”

During the 1990s the top team - and others in the club - were securing some fine results and Stewart was pitch side when the first XV reached the first ever Scottish Cup final against Hawick in 1996.

Dennis Carmichael took over the role of Team Secretary and I became Kit Manager. This involved supervising laundry and checking and sorting around 100 playing jerseys, dealing with medical kits as well as cleaning and blowing up to 20 rugby balls for every match day.

He also had a spell as House Convener and always juggled his roles to the best of his abilities. At that time, Stewart was spending at least five days a week at Myreside.

Since they were formed 20 or so years ago he has played a big part in the Women’s section and has taken great pride in seeing them grow to where they are today as the top female club side in Scotland.

He was involved in their first ever game as a team and the last game before the Covid-19 pandemic intervened which, oddly enough, was played at Howe of Fife and he has missed very few games in between.

“Seeing the Women’s XV lift the Sarah Beaney Cup in 2019 at Murrayfield was a great highlight after having won several minor trophies in previous seasons. I was pitch side when the men’s first XV won the Scottish Cup in 2006, a good feeling after the disappointment of losing finals in 1996 and 2003,” Stewart states.

“I was also fortunate to be involved with teams which won various sevens tournaments including Melrose and the Scottish club Championship. It was a particular pleasure when the women won the Scottish Premiership at Myreside last season.

“I have made many friends at the club over the years and during that time have seen probably hundreds of people in different roles come and go. It is always nice to see male and female players who have represented Watsonians going on to represent Scotland at different levels.”

Stewart reckons he has been in attendance in some capacity at least two thousand games and that does not include all the training sessions over a spell of approximately 55 years.

Although somewhat limited now by advancing years, Stewart is still keen to get the tracksuit on over lots of layers of warm clothing and help out where he can. He says he can still spot a talented player.

Stewart would not have been able to do everything that he has done for the club without the support of his wife Anne, a retired Head Teacher.

As well as son Blair who was previously mentioned, he has a daughter Lindsay, both of whom attended GWC. He also has grandchildren Alexander (6), Ruaridh (4) and Freya (2).

Photo of Stewart, Anne, Blair and Lindsay at Myreside by Graham Gaw

If Stewart’s story has made you keen to get involved and volunteer with the club, we would love to hear from you, please contact Club Administrator Fi Sharman on info@watsoniansrugby.com