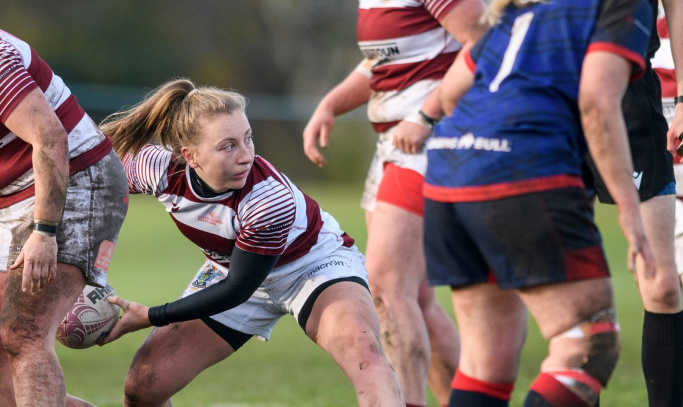 We caught up with Women's XV scrum-half Hannah Davisson...

The Women’s XV have been having a great season to date and one of their most consistent performers has been scrum-half Hannah Davisson.

On Sunday the Tennent’s Premiership semi-final was postponed due to a frozen pitch with a new date for the game against Stirling County to be arranged soon.

And whenever it does get played expect Hannah, 25, to provide a solid link between the forwards and backs from number nine.

So, how did Hannah, originally from Hildenborough in Kent, end up in Edinburgh and with Watsonians?

“I had played hockey and netball growing up, but when I went to Durham University to study geography I got involved with rugby and loved it,” she said.

“I started playing on the wing, but a couple of days before a college game the scrum-half from my team broke her arm. They put me into the position for that game and it has stuck ever since.

“After my time at Durham I went back home and studied for a masters in London. During that time I played for my local club Tonbridge Juddians before I moved up to Edinburgh in January.

“I headed down to training to Watsonians and was a bit nervous at first because it was a high standard and I wanted to be challenged, but everyone made me feel so welcome at my first training session and I have loved it here since then.”

Hannah made her impact straight away and played in the knock-out stages of the Sarah Beaney Cup as the team made it to BT Murrayfield and then defeated Hillhead/Jordanhill in the final.

“To play at Murrayfield was amazing, I enjoyed it so much,” she explained.

“This season has been great so far and the brilliant ting to see is that after every game we know that we have things to work on and want to get better individually and as a group.

“We are not complacent at all, we are always working hard and we are only focused on the semi-final at the moment, it will take a good performance to defeat Stirling County.”