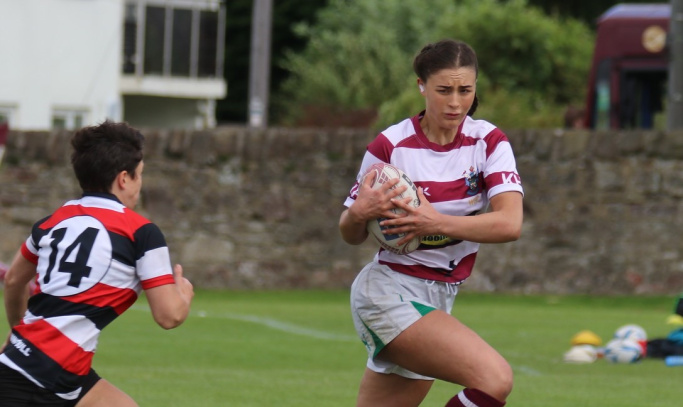 We catch up with Women's XV player Nicola Brown...

She may be just 19 and only took up rugby 11 months ago, but Nicola Brown has already made a real impression with the Women’s XV.

Ever since the player from Midlothian headed down to training for the first time last December she has made great strides in terms of learning the game.

Indeed, Nicola has even made a move from the wing to second-row in a few short months since she played in her first ever rugby game in the 2019/20 pre-season friendly win over Stirling County at Myreside.

I am pretty new to rugby, I started to play last December when I headed down to Watsonians to train for the first time,” Nicola explained.

“I always wanted to start rugby when I was younger, but I was never able to. I liked team sports like netball growing up, so when I got a bit older that is when I decided to really give rugby a proper go.

“During last season I got in touch with Watsonians and Emily Cotterill got back to me straightaway and it seemed liked a really good club to get involved with.

“I am so glad I did because although I was nervous at my first training session everyone was really welcoming and was very understanding that I was new to the sport.

“They were patient with me as I learnt about the game and over the course of the second part of last season I trained hard and watched some of the matches as I kept learning about rugby.

“To see the team win the Sarah Beaney Cup was amazing and left me keen to get down for pre-season ahead of this current campaign.

“Playing that first game against Stirling County was also a bit nerve-wracking, but my team mates kept me right out there on the pitch and I had great fun.”

So, how did the move from wing to second-row come about?

“After the Stirling friendly I grew in confidence and played a bit on the wing, but then it was mooted that I move to the second-row I was quite keen because I like to work hard and the forwards always have something to do in the game,” Nicola said.

“The match against Ayr last week was my first in the second-row after a few training sessions learning the role and once I got into the game I really enjoyed the scrums and the lineouts and things like that.

“The other players who normally play second-row like Sarah [Jones], Celine [Thery] and Rachel [Bragg] have helped me out a lot and hopefully I can learn more about playing the position going forward.”

This Sunday the Women’s XV, top of the Tennent’s Women’s Premiership, take on second placed Hillhead/Jordanhill at Hughenden - it should be a cracker!

Get down to Myreside on Sunday, November 17 to see the Women’s XV play against Corstorphine at home