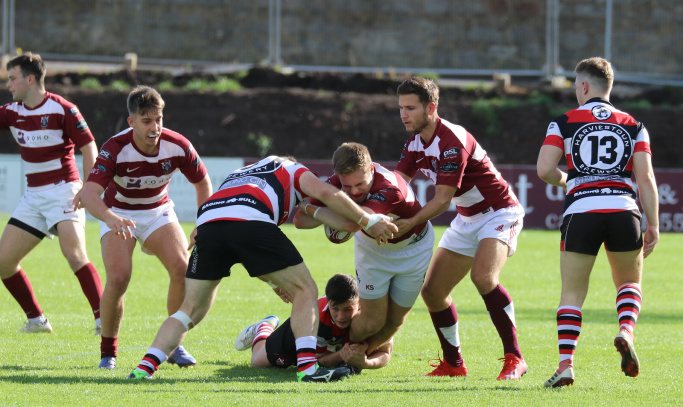 A beautiful day for rugby with the sun shining and a gentle breeze blowing, lulling the spectator into thinking that summer was still with us at Myreside on Saturday.

The club, despite missing at least 20 players through injury and unavailability, still managed to field three teams on Saturday although the third XV were not quite up to that number as Chris Scott’s call-off whilst warming up for the first XV had repercussions all the way down.

County kicked off into the breeze and ‘Sonians were soon in their half with an admirable urgency in the way they pressured the visitors. The set piece was solid especially the lineout and it wasn’t long before Kresimir Coric, our Croatian international hooker, powered over for the opening try of the match. Full-back Kerr Stoddart made no mistake with the conversion and we moved into a 7-0 lead.

It didn’t last long unfortunately as the Stirling right winger showed admirable pace and determination to get over in the corner. A good kick from far out tied the game, but we again moved into attack. After a series of charges near their posts, the referee, who had a good game under the watchful eye of assessor Jim Fleming, awarded us a penalty which Stoddart again calmly converted to take us to 10-7.

Back came Stirling and once again their winger showed good pace and footwork to go over for his second try in a similar position to their first. They couldn’t convert but took the lead at 12-10. We worked our way into their half and No.8 Harry Fisher scored a try in the corner which was unconverted to take us back into the lead at 15-12.

In an end-to-end game, Stirling pressed for another score, working it towards their right winger - who else? - before home winger Jamie Stephen intercepted the pass however and showed a clean pair of heels to outstrip the defence to run in from nearly his own ‘22’. Stoddart converted and we moved out to 22-12 ahead.

Stirling as always in this game pressed right back but our defence was firm and we held out until half-time.

Bruce Ruthven, our Head Coach, made one change at half-time bringing on the powerful Alexander Begg for Spencer on the wing. He made an immediate impact on debut by taking a pass on the Stirling ‘22’ and powering over in the corner. Stoddart could not convert, but we had the try bonus point and on the touchline we thought that the team would kick on from here. 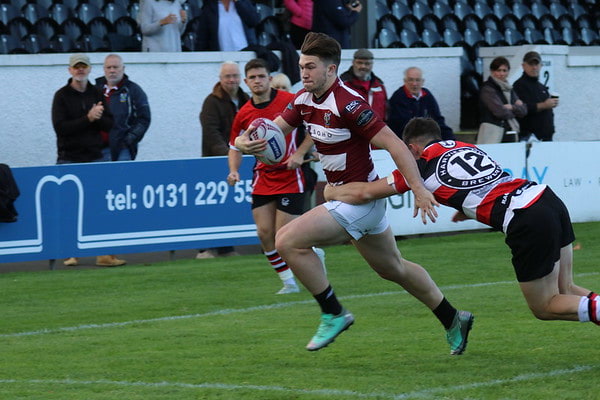 Unfortunately, it was not to be as we pressed in attack, but too often took the wrong option or knocked on. Having withstood the pressure, Stirling came back into it with a try and it was 27-17. We entered a phase of really bad play, summed up by poor kicking, poor tackling and poor choices in offence.

Every kick was loose allowing Stirling to regain possession and run it back at us and in doing so, they inevitably beat the first man and made inroads into our territory. They scored in the left corner where in truth it looked as though we managed to get the attacker into touch in goal, but without neutral touch judges it was not easy to judge and the decision was not disputed by the team, thankfully, but the score was now 27-22 and Stirling were back in contention.

Touch was missed from a penalty which would have allowed us to gain an attacking lineout in their half and Stirling came back at us.

From an attacking scrum about five metres out, one of their back-row powered over leaving a simple conversion which gave them the lead again at 29-27.

There had been a few stoppages and as the game moved into injury time, our young team, average age 20, retained possession and worked the phases into Stirling’s half. A series of pick and go moves got us closer to the line and after one such attempt the referee signalled for a penalty for us, stand-off Chris Bell chipped to the corner but Fisher was denied by the County cover.

The referee brought it back for the kick and Bell, as befits our captain, coolly kicked the penalty to win the match for the Club XV.

A good match, played in good spirit between two attack minded teams and well refereed. What more could a spectator ask for? Unfortunately our second XV lost to a well-organised Preston Lodge team and our third XV lost to a much younger Melrose ‘social’ team, but at least we managed to get everybody up and running and it was great to see all the players mixing together on the balcony in the sunshine.

A big 'Thank You’ from me to all our supporters, the team do appreciate it and if any of you would like to do more, then I can definitely use your help on match days as both second and third XVs could do with Team Managers.

Coach Ruthven said:“Delighted with the young squad’s efforts in a game that we were looking comfortable after 60 minutes, but it shows you can’t take your foot off the gas which will be a vital lesson for the youngsters.

“We scored some fine tries and will be looking forward to heading to Cartha next week which will be another tough test.”

Stuart Allison, Alexander Begg, Josh Law and Finlay Broomfield all made their debuts for the Club XV team and we wish them all long and happy careers here at Myreside.