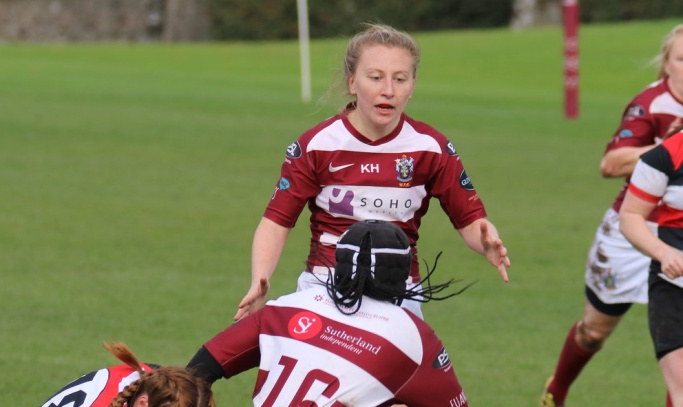 Gary Heatly reports on the Ladies XV’s Tennent’s Premiership match with Stirling County as they made it seven wins in a row:

The Ladies XV have now scored 496 points in just seven league matches in 2019/20, but the fact that the team know they have plenty to work on ahead of the final three regular season matches and then the play-offs shows the work ethic that the group has.

Stirling County have vastly improved in the last couple of years and in players like Scotland cap Siobhan Cattigan and skipper Rachel Shankland they have real quality.

They also named former ‘Sonians winger Anya Foxworthy-Bowers in her new position of stand-off for last Sunday’s Tennent's Premiership visit to Myreside and the hosts, without regular skipper Rachel Bragg, knew they would have to play well to win.

In the end they did make it a seventh league win from seven after a 75-7 triumph, but the match was more keenly fought than the scoreline suggests and both packs really went at each other.

Scotland centre Hannah Smith led the way for Watsonians, who were being skippered by Isla Craigie at full-back, as she scored four tries.

Nightingale was also on fire with the boot, converting 10 out of 11 tries to give her 25 points for the day.

In truth, there were a number of players in maroon and white who could have earned those awards; Ciara O’Halloran recovering from Ireland’s World Cup exit to excel out of position in the second-row, back-row Freya Gannon-Burns continuing her fine season and Davisson – apart from one ‘interesting’ box kick - looking assured at nine for example.

If ‘Sonians are to go on and win silverware this term though it will be because of the strength and depth they have in the group and it is pleasing to see different players stepping up to the plate each week.

On Sunday second placed Hillhead/Jordanhill defeated Ayr 100-0 to stay level on 35 points with the Ladies XV having played one match more.

The team are next in league action on November 3 away to Ayr while a big ‘good luck’ goes to all the WFC players involved in Scotland Women’s training ‘hit out’ with Ireland this weekend.