Match report: Momentum stays with Watsonians after win at Cartha 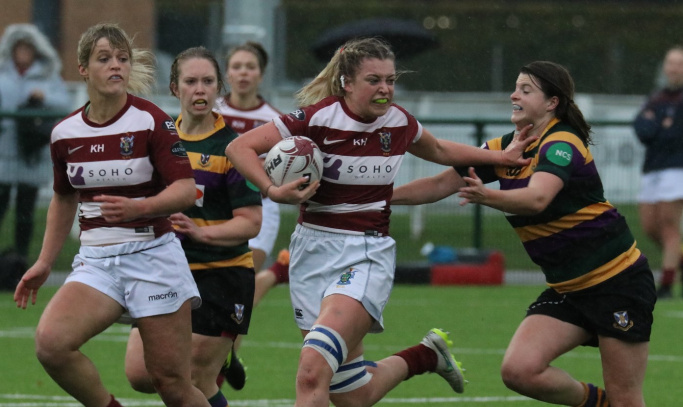 Charlotte Runcie reports on the Ladies XV’s Tennent’s Premiership match with Cartha Queens Park in Glasgow as the visitors won 75-19:

Cartha looked to play the conditions early with a kicking game, getting alineout early on just outside Watsonians ‘22’.

However, a steal saw the Watsonians backs spread the ball out wide to the winger in space, Shannon Macey. A strong carry from Lucy ‘Sonny B Wints’ Winter and tight carries saw the ball whipped out to full-back Isla ‘Craigie’ who was denied the first score as the ball was knocked on.

Cartha looking determined not to let Watsonians in easy and although enjoying the majority of possession, Watsonians hitting up too high saw Cartha drive them back.

After 10 minutes of play, centre Hannah ‘Big Smithy’ Smith, looking fresh from her trip to South Africa with the national team, took the ball on, and a slick offload to winger Bryony ‘Bry’ Nelson, saw the latter in for the first points of the match, and her first of four scores. Nicola ‘Halfers’ Nightingale with the conversion.

Straight off the kick-off, Freya Gannon-Burns made a nuisance of herself, (the whole game) with steals in open play and numerous times in the lineout with an excellent salmon technique.

However, a penalty inside Watsonians’ 22’, and some soft tackling saw Cartha onto the score board through scrum-half Ellie Sutherland, who dived over from short range. The conversion narrowly missed.

Off the restart, Cartha looked good with ball in hand, but another steal (likely from Freya) saw Alice ‘Swaggy AL’ King with a trademark carry and she had several defenders hanging on. She got the offload away to Big Smithy who beat what seemed like 15 players to get her first score. Halfers adding the extras.

After pressure from Freya, and Swaggy Al with the turnover, Sarah Jones was released to run 30 metres and bump off unwilling defenders, and some hot potato passes to Craigie, Watsonians were unlucky not to capitalise. Bry showed her versatility and strength to get through a lot of work and a big steal in Cartha’s half. A nice nudge from Halfers, and taps aff from hooker Izzy Dressler, Watsonians piled on the pressure.

Halfers came off with a knock, allowing Niamh Deans to come on at centre, and with a turnover in the scrum for Watsonians, Deans had been on the pitch maybe 30 seconds and she’d scored in the corner. Halfers fixed up, Niamh was back on the sidelines and pretty chuffed with her comeback.

After racking up a couple more penalties, Cartha hit back with a score from their hooker, another close range score and lovely strike from Cartha’s 10, saw them keep the score close.

A lovely tip from Al to Wints, saw Big Smithy run round the defence, offload to Al who released Rebekah Nolan down the touchline. Cartha bumping Watsonians out, saw another lineout steal, and with some fancy Halfers footwork, and a cheeky grubber from Big Smithy, saw Shannon Macey go in for a well worked - and off the cuff - try.

A big steal from Izzy outside Cartha’s 10m, and sustained pressure, saw Emma Evans on her return from injury go through a gap with her snake hips untouched for a score.

Cartha’s No.8, added some momentum to her team just before the half brushing off tackles but a knock on brought the game to half time.

Some quick ball from scrum half Hannah Davisson, and some slick timing from Big Smithy and assist from Craigie, saw Bry go in for a score down the wing.

A flag up from the touch judge saw Halfers yellow carded for a neck roll, who claimed she hadn’t been in a ruck that half (which was absolutely true after consulting video evidence) and without naming names, picked up a team mate’s offence.

With some constant pressure from Wints, and a nice link between captain Rachel Bragg and Freya saw Big Smithy accelerate up the touch line to score. Shannon taking over the kicking duties was unlucky with the kick as it fell short.

The ball popped up nicely for Wints, who allows Davisson to get the ball out to Bry to score her third.

Possession changing hands as the rain pours, but a turnover in the scrum sees Wints run 70m, and the ref calls her Sonny B Wints pass forward (never). Wints then assists prop Caitlin Abernethy, to shunt her over the line for a score. Shortly after, Evans dived over for her second.

Sarah Jones is then unleashed by Wints to go maybe 80m to be tackled just short of the line, but Bry is keeping up with the new found pace of Jones to receive a nice offload and go over.

Final score goes to Big Smithy as she dances through a mismatch to bring the game to a close.