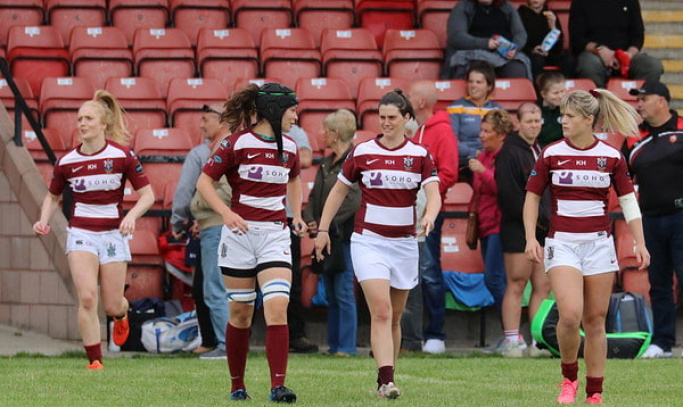 ​Sarah Nimmo reports on the Women's XV and their Tennent’s Premiership match with Ayr.

One would be forgiven for thinking a home victory for Watsonians women of 142-0 against Ayr Ladies, says that the game was a one-sided affair.

However, the determination of the Ayr players - who have only just arrived into the top tier of women’s rugby in Scotland - to keep putting up a fight when faced with such odds needs to be borne in mind.

Myriad tries were scored by the pacey and powerful Watsonians wings Anna Forsyth and Bryony Nelson, and the almighty and seemingly omnipresent centre Hannah Smith.

The maroon side’s back-row contributed significantly to the scores on the doors, with a determined and skilful Lucy Winter, alongside the towering and terrific Alice King, crossing the white line three times each.

Taking a try each were Izzy Drexler - definitely one to be watched as she comes into her own as a powerful, but nippy pack member - and captain Rachel Bragg who stormed over the line all the way from deep within Watsonian’s own half.

Nicola Nightingale’s right foot was certainly singing after leading the conversion efforts throughout the game, compounding her side’s dominance for so much of the game.

When playing against a side that struggles to keep up, teams can lose their shape and form, simply running through the first gap that comes their way rather than rehearsing moves and tactics they will rely on to get through tougher games.

Watsonians though seemed to use this as time to practice all the new plays they are keen to perfect - many orchestrated in training by their technically superb Backs Coach Scott Nightingale.

Those assisting the tries therefore played a big part, delivering skilful offloads, clever phases of play and selfless acts - Freya Gannon Burns delivered some impressive hand-offs and evasive runs, while scrum-half Hannah Davisson shone bright as a great all-round player, able to lead some intelligent phases of play and make good yards herself - all things that suggest this is a side that recognises the value of getting the best from each and every player, and wants to win together, not be remembered only for a few big names.

Despite the score, the prospect of Ayr progressing and becoming a real force to be reckoned with in the years to come is a very real one if they can continue to plough such determination and spirit -demonstrated in bucket loads particularly by their powerful No.8 - into their game, stranger things have certainly happened in women’s rugby in Scotland, with the meteoric rise and subsequent fall of Melrose a clear example.

Looking ahead, Watsonians will retain their home advantage as they welcome the ever-formidable Hillhead/Jordanhill women to the east this weekend.

In stark contrast to last Sunday’s game, the upcoming clash between the Edinburgh and Glasgow sides will likely be a much closer affair, but in terms of points only as both teams yearn for dominance in their first league encounter of this season.

After being such a supreme force in Scottish rugby for so long but having endured a cup final defeat at BT Murrayfield last spring at the hands of an invigorated Watsonians side, Hill Jills will fight hard to regain their metaphorical crown this coming Sunday.

Complacent Watsonians will not be, however, despite recent successes.

The inauguration of a new Head Coach in the form of the effervescent Freddie Main has brought new energy to a side already riding high after an influx of some big runners and hitters (Megan Gaffney and Hannah Smith to name only two, both formerly Hill Jills themselves).

Follow Watsonians or Hill Jills on Twitter to keep up to date with the scores, or better still, head to Myreside for a 2pm kick off this Sunday for what is sure to be a game to remember.