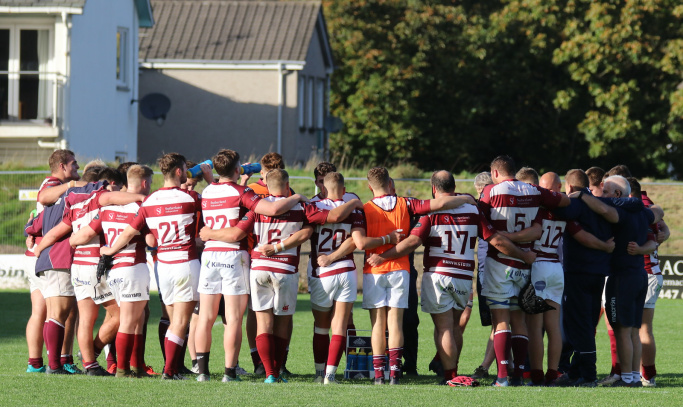 The rain stayed off and that was about all that was good about our trip to Cartha.

We were up against a fairly mature team especially in the pack and we struggled to contain them in the first half as they came out fired up and eager to make amends for a heavy defeat at the hands of Heriot’s last week.

Cartha were cock-a-hoop and when we did try to run the ball Cartha were aggressive in defence. Captain Chris Bell did manage to score a try against the run of play, but generally it was one-way traffic and it came as no surprise when their pack went over after a series of drives close to our line.

Cartha secured the bonus point in the first half when the referee awarded them a penalty try after more forward pressure at the end of the half. All in all quite depressing and 24-5 at half-time.

Second half was better for us in that we were able to gain possession and exert a degree of pressure on the home team. So much so that Cartha were barely in our half at all.

We camped on their line and a series of drives earned us lots of penalties and even a yellow card, but no tangible reward on the scoreboard as the referee deemed that we had transgressed and Cartha cleared, but we came back and once again our pack laid siege to their line.

Replacement Craig Watters appeared to be over, but the referee ruled that he was held up, but the try was delayed only momentarily as back-row Stuart Allison forced his way over and full-back Kerr Stoddart converted to take it to 24-12 for Cartha.

We weren’t done however and again the forwards took it to Cartha. Another series of drives, another string of penalties, but on this occasion no yellow card and disappointingly no penalty try for us as Cartha appeared to collapse a driving maul which was moving with pace towards their line.

This would have earned us a losing bonus point, but might also have put some doubt in Cartha’s minds and allowed us to go on and snatch a draw. The game finished 24-12.

A disappointing result after a good week’s training, but in truth we were second best at everything in the first half and allowed Cartha to build up a head of steam and a healthy lead, so much so that they didn’t need to do much in the second half.

We were passive in our defence and when carrying the ball forward into them. Too many of our players were content to run into a Cartha player and go to deck as opposed to trying to go through the Cartha player and then the next one. Rugby - believe it or not - is a game of aggression as well as skill, both collectively and individually. We need to grow up and learn this quickly and adapt or else it will be a long, hard season and I don’t wish to see us bullied again as we were in the first half of this match.

Head coach Bruce Ruthven said: "The boys were well below par in their first half efforts which ultimately gave them too great a challenge in the second half despite scoring seven unanswered points. There were too many individual tackles missed which gave the Cartha QP players the momentum they required to put us under a lot of pressure and once again our poor kicking game also gifted them two soft tries. More learnings for the boys and I look forward to seeing how they react this week in training whilst working towards another hard game this weekend."

Man of the Match: Straight off a nightshift but certainly not asleep as he took the fight to Cartha, Jonny Goldring.