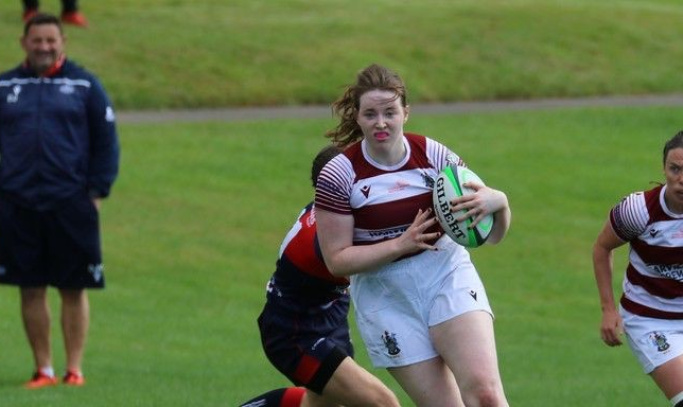 We chat to the Women's XV full-back...

A number of new faces have made their mark in the Women’s XV so far this season - and full-back Julie Lyons is one of them.

The team have won their last three matches against Heriot’s Blues, Corstorphine Cougars and Cartha Queens Park, meaning that they sit second in the Tennent’s Premiership ahead of their round nine trip to leaders Hillhead/Jordanhill on Sunday.

And Julie is very much enjoying her rugby at Myreside since joining up with the club in the summer.

“I only moved to Edinburgh in February time to continue my studies and coming to a new place during a pandemic was quite daunting, but once I’d settled in I decided to restart my rugby again and join up with Watsonians,” the 23-year-old from Skehana in Galway in Ireland, who is now studying for a Masters in Child and Adolescent Psychology in the capital, said.

“It was actually one of my old coaches from Galwegians back home who suggested I get in touch with Watsonians when I told him I was moving over here.

“Things didn’t get off to the best start on the first night as I could not find the Craiglockhart training pitches, but eventually I got there and after a couple of sessions I felt like I had settled in.

“I found out that the team had been pretty successful in 2019 and that a few of that squad had moved on, but the coaches Freddie [Main] and Scott [Nightingale] were really good early on at helping the newer faces like me integrate into things and I think people can see by the results that in the last few weeks this new-look group has really started to gel pretty well.

“We have two big games to come in the league before the winter break, the first of which is away to Hills on Sunday, and we are just focused on keeping our form going heading into the play-offs which take place early next year.”

So, how did Julie get into rugby in the first instance?

“I am from a rugby mad family, I actually think rugby was one of the first games I played. I was down at my first club Monivea from about the age of six or seven playing with and against the boys, but a few years later I wasn’t allowed to do that and there was no next natural step for me to take in the sport,” she explains.

“I headed off and played Gaelic football and camogie and it was not until I was at university that I picked up rugby again.

“That was in the second year of my Psychology Degree at the NUIG [National University of Ireland Galway] and I played with the team there for a couple of years and also went on to play for club side Galwegians once I had graduated.

“When I was at NUIG I was itching to get back playing, so my friend plucked up the courage to go along to training with me one night.

“And straight away I fell in love with the game again, I was hooked.

“The season with Galwegians was also great fun in 2019/20 post-university before the pandemic hit.

“I like playing full-back because you can see what is going on across the pitch and I try and communicate with my team mates as much as I can during games.

“As a backline at Watsonians things have started to click now and I am just excited to see what this team can achieve going forward.”

As well as doing well on the pitch, the course Julie is currently undertaking runs until February 2022 and she has been busy working on a second draft of her dissertation recently, so all at the club wish her well with that.

Bonus point win on the road for Women's XV