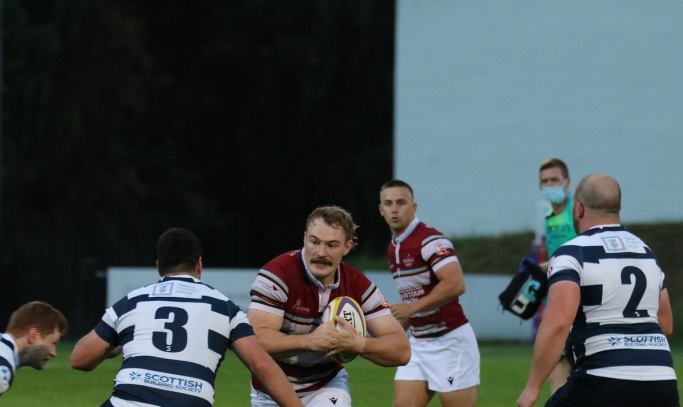 We report from the FOSROC Super6 match at Myreside…

They say that all good things must come to an end - and on Friday night Watsonians Rugby's season and a half long unbeaten home run in the FOSROC Super6 came to an end.

The team won five games at Myreside in 2019/20 and have defeated Stirling County and the Southern Knights already on home turf this term. They looked like they were going to extend that record when stand-off Marc Morrison kicked a penalty to put the team 20-18 up against Heriot's Rugby under the lights and in front of the TV cameras.

However, Heriot's had other ideas and completed the 2021 double over the men in maroon and white when replacement stand-off Nathan Chamberlain, the Edinburgh Rugby man, kicked a last gasp penalty to give the visitors a 21-20 triumph.

The evening started well for 'Sonians when Morrison kicked a penalty after four minutes before opposite man, Bruce Houston, replied with three points of his own after 23 minutes to tie things up at 3-3.

Four minutes later forward power that we have seen so often this term led to Watsonians being awarded a seven point penalty try and Heriot's second-row Fraser Hastie was sin-binned for his part in proceedings.

In the 36th minute Heriot's then lost Iain Wilson, their back-row and Captain, to a yellow card and as they tried to regroup, Watsonians took advantage to score a try just before the interval through second-row Michael Badenhorst converted by Morrison.

At the start of the second half, Wilson was still off the field, but it was Heriot's who scored first.

Heading into the last 20 minutes the score was still 17-8 before the game was turned on its head soon after when home tighthead prop Steven Longwell was yellow carded just after the visitors had been awarded a penalty try.

Just as Longwell was returning to the fray in the 73rd minute Chamberlain put Heriot's 18-17 up with a penalty before the late drama.

After six rounds of action Watsonians have won four and lost two now, but despite the defeat No.8 Sam Daly was named FOSROC Player of the Match.

Watsonians Rugby’s next game in the FOSROC Super6 is away to the Southern Knights on Friday, September 17 at 7.30pm

Squad named to take on Heriot's in rematch