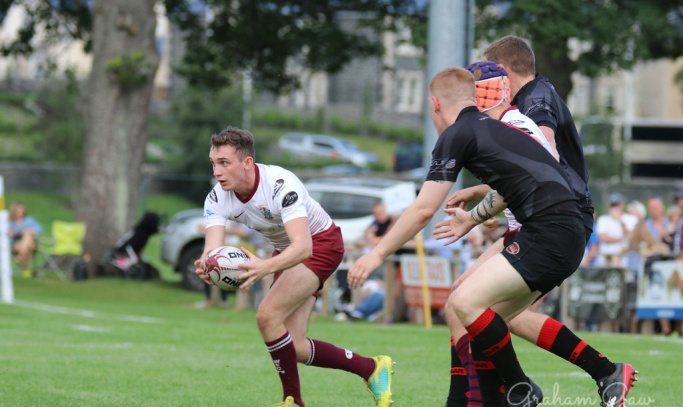 All of a sudden its Saturday 3rd of August and the new 7s season is kicking off at the Gytes with the Peebles 7s, the first of two Autumn 7s events in the 2019/2020 King of the Sevens series.

It felt very much like the Spring series had just finished, with WFC 7s crowned Kings of the Sevens for the third season on the trot. As it turns out, that feeling was just about right – the spring 7s had only just finished in mid-May, with the new one already beginning. All of which is largely irrelevant to this report, but simply afforded a way (if a little gratuitously) of recording (again) the fact that WFC 7s were crowned Kings in April – making us the reigning Kings - and in in the act becoming the first club in the history of the King of the Sevens series to be crowned champions, three times in succession!

Things will be a little different this series as we start again in building a new team for the future. Two of our most experienced 7s players of recent times, Andrew Skeen and Rory Steele have retired, our Super6 contracted players are not eligible – by “gentlemen’s agreement” with other clubs (although one club appeared to ignore this) - and with a number of lingering injuries, it was a young and inexperienced side we took to Peebles.

Nevertheless, and despite very little preparation time, the side – once it had gelled a little – played very well and comprehensively saw off Biggar in our second pool match. Unfortunately, by this time we had already lost to Gala – who are always wily 7s exponents – in our first pool match, and this despite leading by 12 points at one stage only for our inexperience to be exposed under pressure, with some naive decision-making resulting in poor ball-retention allowing Gala to capitalise on the chances we gave them, which they will always do with gratitude! Anyway, three points for the series in the bag at the first tournament, not a bad start.

Afterwards the mood was positive, we turned out a young and inexperienced team all of whom performed well and learned a lot, which is what it’s all about. Perhaps if we had played Gala second we may have beaten them, and the fact that they only narrowly lost their semi-final, is encouraging. Our team was packed with capable young rugby players in Chris Bell, Coran Henderson, Calum Harris, Gregor Nelson, James Millar, Connor Pearce, Ross Currie and Fraser Cousin. These young-guns ably led by Willie Thomson who - as always – gave his all in being our star performer of the day. Thanks to Coach Conan Sharman who did a great job with his young charges and to all 11 players who turned out on the day.

The mood wasn’t quite so great the following week at Hawick on the 10th August, mainly due to the fact that we could muster only 6 players and had to borrow 3 from Peebles (once they had been knocked out) in order to get a team on the field. We had lost 5 of our team from the previous week due to a combination of holidays, illness and 3 players called up to the Edinburgh U20 squad, all of which made things a little challenging. This, combined with a couple of very lame Saturday morning call-offs – which were not appreciated, but which are most certainly noted – resulted in us travelling to Hawick with 6 committed and cheery individuals. A bit of swift negotiation resulted in the 3 Peebles players joining our ranks – Murray, Sam and Chris we are very grateful for your help – and, after sprinkling of a little bit of his coaches “magic-dust” on the lads, coach Conan was able to get a team on the field, none of whom looked out of place.

Cast as the perennial villains in the Borders, we were apparently given a hard time in the “media” for turning up with only 6 player (I personally didn’t hear the commentary, but have been reliably informed) which is not unexpected, and fair enough but disappointing all the same as, unlike two other teams, we DID show up. Parochialism only drives us on and we will proudly wear our kit bearing 4 crowns next spring as we continue to build the next champion WFC 7s team!

Conan’s magic-dust seemed to work as we came from 15 – 0 down, to record a 19 – 15 win in the first round against a feisty Hawick Force team who were clearly right up for it – one or two of them perhaps too up-for-it. Our team took a bit of time to settle but outstanding leadership, coupled with big performances from both Willie Thomson and James Millar, along with some trade-mark hard-hitting from Gregor Nelson and Connor Pearce, no small amount of guile from Ross Currie and hard-work and determination from Ciaran Kinnear (good to see him back in the colours having been a GWC pupil and playing mini and midi rugby for the club, prior to taking up a rugby scholarship at Merchiston), brought the match back our way. The boys were ably assisted by our tres amigos from Peebles throughout, and who, to a man showed great attitude and ability, buying into the cause as if playing for their own club. Oh, for some of that to rub off on one or two of our “players”! 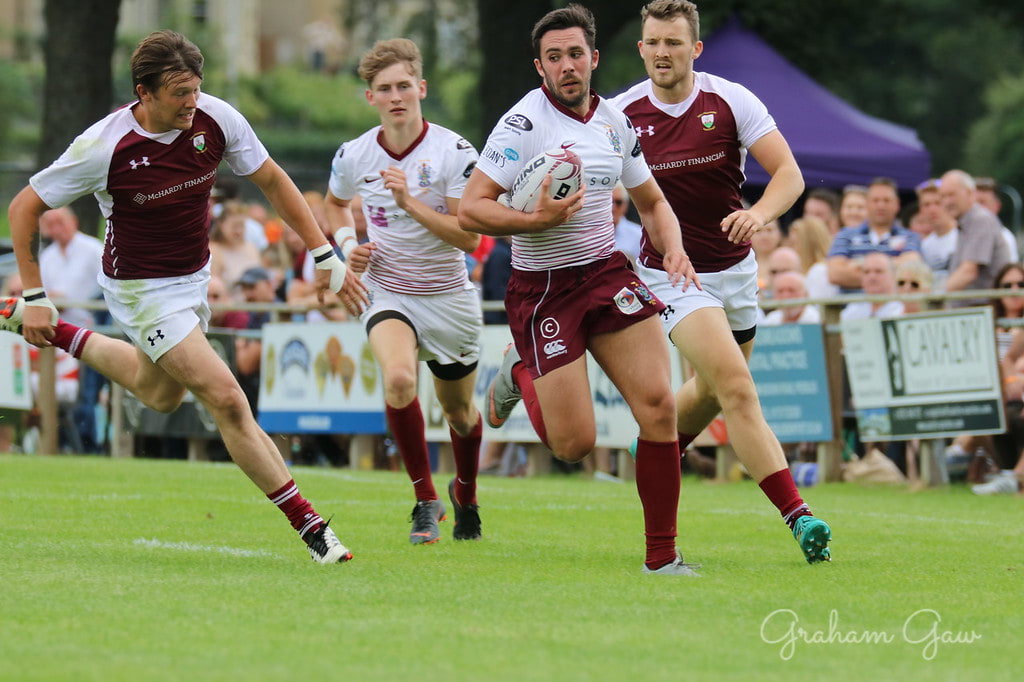 Quarter-final time and next up was Jed. Winners the previous week at Peebles and given that they will have their full complement of players available throughout the series – barring injury – the betting-man’s Kings, this year. Nevertheless, our guys were not phased and as one top former-player and coach put it: “you may have a new young team, but you know what you are doing”, this along with some unrepeatable derogatory remarks on “commitment”. Only 7 -0 down at half-time after an excellent exhibition of aggressive defence and great ball retention had Jed rattled, (which is always pleasing) forcing them to come out firing on all cylinders in the second half if they were to beat us. This they duly did, through scoring 3 (further) converted tries on their way to recording a 28 – 0 victory. Which, for the record, was NOT the straightforward, comprehensive, conquest that it was (mis)reported as in some circles.

Onwards and upwards for the season of XVs rugby ahead, and then the chance to bring a new 7s team together in the Spring and build for the future. 6 points on the board in the Kings series is perhaps not the start we wanted, but its better than it could have been, and gives us something to build on. While it is unlikely we will challenge for the series this season, we will try our utmost and don’t be surprised if we bring back a trophy or two to Myreside, once the coaches have had a little time to work with, and mould, the squad.