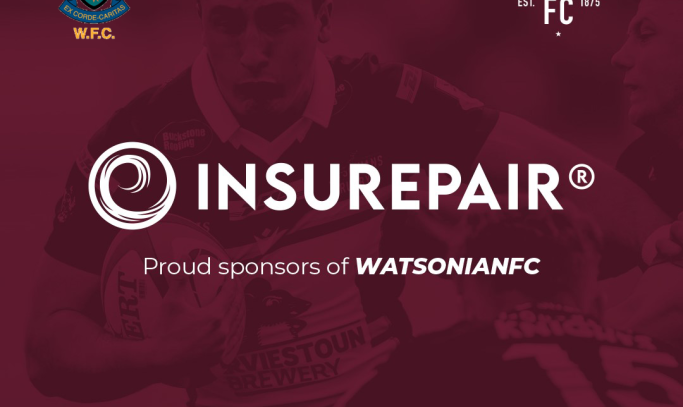 Watsonains are excited to announce another great addition to our growing sponsorship team.

The agreement between the club and INSUREPAIR will allow the club to continue to grow and develop its programmes producing world-class rugby players and people.

The sponsorship will see the INSUREPAIR logo on the Super6 jerseys in the upcoming Super6 Series and across the club.

Watsonians Commercial manager Johnny Matthews believes INSUREPAIR is an excellent addition to the club's sponsorship team. "We are so excited to work with Richard and the INSUREPAIR team. They pride themselves on high-quality work, and we pride ourselves on high quality on the pitch."

Richard O'Donnell, Managing Director of INSUREPAIR, shared his excitement about the deal "We are thrilled to be involved with Watsonians, and we can't wait to see how they perform in the league this season. As a business, we are always keen to find new ways to engage with our community and sponsoring the team allows us to support local sporting talent. Best of luck to them this season, from everyone at INSUREPAIR.”

INSUREPAIR, pronounced Insure Repair, based in Edinburgh, is a driving force changing the property repair industry for the better.

Having existed for over two decades, the company have built a solid client base around the service, quality and speed of its work.

If you need to enlist the services of INSUREPAIR, you can find them across social media (see below) and on their website.

Graham + Sibbald is back on board as a principal sponsor.