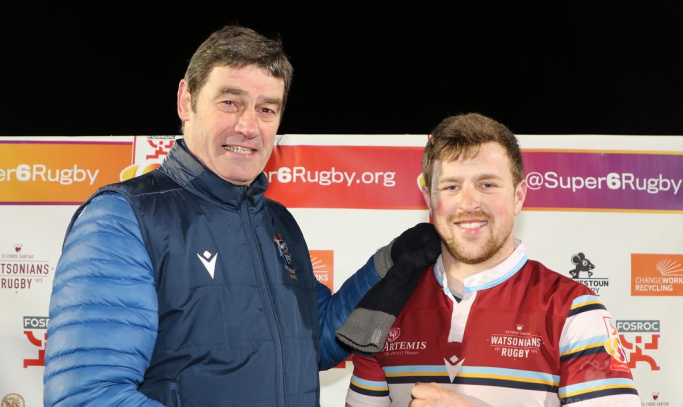 ​Euan Kennedy reflects on an eventful term as President

When Euan Kennedy took up the role of President of the Watsonian Football Club ahead of the 2019/20 season, he could not have imagined what his term of office had in store.

For a start, he was due to be in the role for two years, but has now served three due to the pandemic, while key club personnel such as Mike Crerar and Iain ‘Stavvy’ Leslie have so sadly passed in that time.

Throw into the mix the birth of Super6 - a huge undertaking for the club - and the Myreside clubhouse fire and it says a lot about Euan, his trusty band of helpers that many great things have been achieved at the club since the summer of 2019.

And, as he passes on the baton to Richard Kelly, Euan has been reflecting on the three years - and also looking at the period leading up to that time.

“Even before I took up the post of President, I was heavily involved in the bid to make sure that one of the Super6 clubs would be Watsonians,” Euan, whose links with the clubs go back to his schooldays at George Watson’s College, said.

“Around four years before the Super6 came into being in time for the 2019/20 season I was a cynic about the idea, but it soon came around that there was talk about having to bid for a licence to run a team in the new [part-time professional] league and I co-ordinated a meeting with other Edinburgh clubs to discuss the possibility of a city-wide team being involved.

“That joint team never came to fruition, but as the paperwork and more information became available about the new league from Scottish Rugby, the club began to think that we should be bidding to be one of those involved.

“I also had a long chat with Sean Lineen [who then worked at Scottish Rugby] and what he said about the plans for Super6 made sense, it is all about raising levels of performance and producing more talented young players in Scotland - and Watsonians wanted to be a part of that.

“At the AGM when I was confirmed as the next President, we got the backing of the club’s membership while the working party tasked with producing our Super6 bid put in a lot of groundwork.

“Thankfully, the bid was successful and, although the pandemic has caused issues as it has with everything in life, Super6 is growing all of the time and the quality in the most recent Sprint Series was superb.

“The club managed to win that event and Head Coach Fergus Pringle and his support staff really have done a brilliant job since 2019/20. Jamie Hodgson has gone on to win Scotland caps, while players like Connor Boyle and a whole host of others have played regularly for Edinburgh Rugby since their time with us in Super6.

“I think Super6 as a whole - and the Watsonians team within it - will keep going from strength to strength and that is something to be proud of.”

Away from Super6, Euan probably never imagined that he would be dealing with a clubhouse fire and appointing a Covid Officer only nine months or so into his time as President.

“The fire was in February 2020 and then Covid-19 came to Scotland in late March 2020 and that changed our focus somewhat from matters on the field to matters off it,” Euan, who played for the club for many years and also helped Scotland win the Grand Slam in 1984, reflects.

“Around that time we had also lost our long-serving Treasurer and great club man Mike Crerar, so there was a lot to deal with, but what was so great was that many people with Watsonian Football Club close to their hearts stood up and helped us navigate through some tricky times.

“In terms of the clubhouse, we began to work closely with the school along with other sport sections in terms of the rebuild while Graham Sinclair came on board as Covid Officer and did a brilliant job and Ramsay Urquhart came in to fill in as Treasurer and brought with him a lot of experience.

“So many other people helped us get through the two years or so of the pandemic while the coaches kept the players ticking over and those behind the Warriors junior section also did an excellent job in uncertain times.

“All of which meant that, when training was allowed to get back up to full speed and then matches, leagues and junior tournaments got up and running again, all parts of the club were in a good position to move forward.

“I have previously mentioned the Super6 team’s successes while Andrew Bell did an excellent job with the men’s Club 1st XV during the various lockdown periods and at the start of the 2021/22 season.

“When Andrew was offered a full-time rugby opportunity with Bristol Bears, Jason Riley took up the reins as Head Coach and the work that he and all of the young playing group put in to stay up in Tennent’s National League Division One was spectacular.

“At Christmas time they looked all but down, but a brilliant run of form in January gave them hope and it was so encouraging to see young players taking key leadership roles as they went on to secure their place in the league for the upcoming season.

“The Women’s XV continue to lead the way in this country and, after winning the Tennent’s Premiership in the first half of the 2019/20 season off the back of lifting the Sarah Beaney Cup in 2018/19, they again won the top flight in the season just gone and came up just short in the Cup.

“Outgoing Women’s Head Coach Freddie Main did a great job and deserves a lot of credit.

“It is also encouraging that we have a Club 2nd XV out regularly and are able to field a Club 3rd XV when we can find opposition - many other clubs would love to be in that position.

“And to see the Warriors - which runs age groups from P2 to P7 - keep going from strength to strength and flourishing is excellent.

“I have loved my time as President of the club despite the ups and downs."

“It has been an honour to follow in my father’s footsteps in the role and I wish Richard all the best as he takes over, I know he will do a fine job.

“To have been involved at the beginning of a successful Super6 team and brought DHL in as a sponsor to Myreside - the first truly international sponsor - are things I am very proud of.

Thankfully Euan will still be seen around the club regularly going forward and will now use his experience in the role of Chairman of the Super6 part of the club.