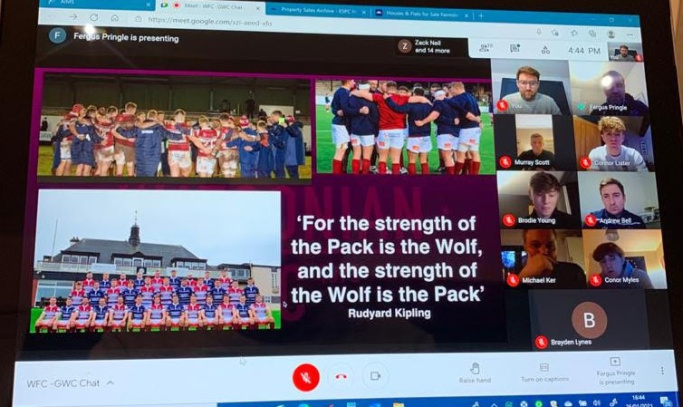 We hear about the strong relationship between WFC and GWC...

A recent Zoom call between coaches and players from the Watsonian Football Club and current senior rugby players at George Watson’s College was a big success.

The youngsters were able to pick the brains of Director of Rugby Chris Hunter, Super6 Head Coach Fergus Pringle, Club First XV Head Coach Andrew Bell and players Murray Scott and Jack Ferguson about all aspects of life at Myreside.

Everyone involved from both sides found it a positive exercise and school leavers will be left in no doubt going forward that they are more than welcome across Myreside Road when they make the move up into senior rugby.

“It was fantastic to be able to introduce the school pupils to Fergus and Andrew, albeit via Zoom,” Chris said.

“We also invited along Murray Scott (Super6) and Jack Ferguson (Club First XV) - both former pupils - to have a chat to them about their rugby journeys since leaving school and whilst the coaches had some impressive PowerPoint presentations they were on hand to talk about the 'social' aspect of club rugby!

“It has been so important to try and keep rugby players at all levels motivated and engaged given the lengthy lay-off they have faced.

“As a result, we felt it was really important for the club to be able to talk the guys through how we operate as a club, both on and off the pitch, and how they can play a huge part in what is going to be an exciting future at Myreside.

“An important aspect for us is that we can offer rugby to players of all abilities - from social rugby right up to Super6 level - so guys who are motivated to improve and push on with rugby will have the ability to do that and equally as important, those who want to have a run around with pals on a Saturday afternoon.

“Our coaches meet regularly and discuss all things rugby from defence and attack strategies to individual player development. A great example of this is young Struan Wells who stood out at club training and was then given the chance to train with the Super6 squad so the coaches could take a closer look and also allow him to get a feel for the step-up.

“Some of the GWC First XV players had already sampled life as a Super6 player having been invited to come and train, although at a time when it was socially distanced and restricted in what we could do.

“They were given their GPS packs to wear so we could track their performance in line with the Super6 players and hopefully this brief taste of senior rugby will want them to come back for more when we get going again later this year.”

George Watson’s College Director of Sport Mike Leonard said: “Part of my role is to make sure that we establish links with all of the Watsonian sports sections.

“While they may not be purely FP clubs anymore, at George Watson’s we still want as many of our pupils to have the opportunity to play their chosen sport for Watsonians should that chance arise after their schooldays.

“Over the last 10 years or so the relationship between the school and the sections has certainly strengthened and, having worked closely with Watsonian Hockey Club, we have seen what can be done.

“We have established really good links there and around 80% of school hockey players are also aligned with the club. Therefore, we have been able to align training sessions so that they don’t clash and other practical things like that.

“The link-up has allowed us to bring club coaches in at times to help with school coaching and, rugby-wise, it was great to see, before the various lockdown phases, that Fergus Pringle was able to lend his expertise to the school First XV players at some sessions.

“This is something we want to build-on and I think the recent Zoom call was really positive.

“Between us all we want youngsters to feel comfortable when they make the jump into senior rugby.

“They may not join Watsonians straight away if they relocate for university, but it is about them knowing what is on offer if and when they do want to play at Myreside, even years down the line.”

Mike Ker, a PE Teacher at GWC and one of the First XV coaches at the school, is well-known to people at Myreside given that his father Andrew is an ex-player and President at WFC and he himself played stand-off for the First XV for many years.

He was also the driving force behind much of the club’s Kings of the Sevens successes and Mike said: “I remember when I left Watson’s as a pupil in 2002 and myself and a number of my friends from the school team were made very welcome straight away at Watsonians.

“As a youngster it can be a daunting process turning up to senior training for the first time, but as we continue to strengthen the links between the school and the club then it will be much easier for GWC pupils to make that transition to Watsonians.

“It is all about letting them know that guys like Fergus, Andrew and Chris are approachable and are able to answer their questions about anything to do with the process.

“As teachers and as rugby coaches we just want the boys to enjoy their rugby beyond their schooldays.

“They will all take different paths, some may end up playing for university teams or other clubs and others professionally, but if there is a crop of former GWC former pupils sprinkled throughout all Watsonians teams every year then that would be nice to see.”

If you are a current or former GWC pupil and this article has made you keen to get involved with WFC, we would love to hear from you, please contact Director of Rugby Chris Hunter on chris.hunter@watsoniansrugby.com