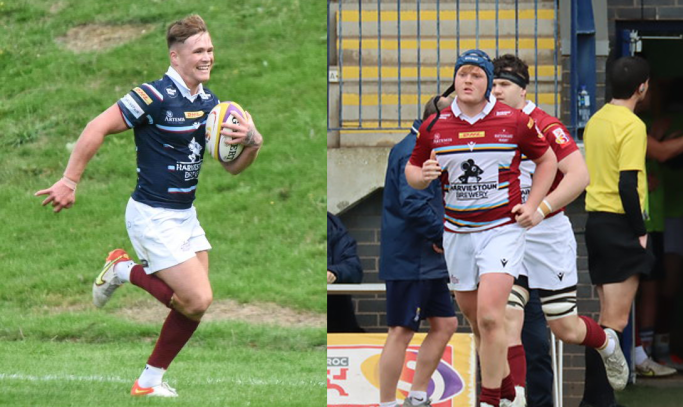 Gregor Socugall and Ryan Daley returned to Myreside to play for the Super 6 team after rising through the ranks of the school.

It is always a thrill for any rugby player to play on the stand pitch at Myreside and for Gregor Scougall and Ryan Daley they are loving playing there with the Super6 squad, having previously graced the same turf when they were pupils at George Watson’s College.

In the 2017/18 season, the duo, now both 20, also got the chance to play at another famous ground - BT Murrayfield - when they helped the school win the Scottish Cup at the under-16 level.

They were also at the national stadium two seasons later as they lost the 2019/20 Scottish Cup under-18 final to Stewart’s Melville College, but it was still a great rugby experience.

Both boys left GWC in the summer of 2020, just after the pandemic had hit and that stalled things a bit for everyone their age before they both suffered injury woes.

In November 2020, tighthead prop Gregor tore his hamstring whilst training with Currie Chieftains, while in the first game of the 2021/22 Tennent’s Premiership season with the same club, winger Ryan tore his quad.

Thankfully Gregor did get to play in the latter event and showed up well in big games, including against England at the DAM Health Stadium.

And by the time the under-20 Summer Series in Italy came about, both boys were in the Scotland travelling squad, with Gregor adding more caps to his name and Ryan making his debut.

“Although the results were not great for the team in Italy, it was a great bunch of boys to be out there with and it was good to have Ryan there too as we have known each other a long time,” Gregor said.

Ryan added: “After my injury I had managed to play a few games for Currie at the tail end of the season and then be involved with the Sprint Series for Watsonians, so I felt I was ready for Italy and it was great to represent Scotland over there.”

Ryan, originally from Fife, mentions the Sprint Series and before they had gone to Italy, both boys had joined Watsonians in time for the FOSROC Super6 Sprint Series event, which took place in April, May and June.

Both had been given a taste of senior rugby with the Watsonians Club 1st XV when they were still at school back in 2019/20 in Tennent’s National League Division One, but this was a step up and they both relished it.

“Coming into the Watsonians squad for the Sprint Series was great because I was able to keep building off the back of a good run of games with Currie with the aim of taking my game to the next level,” Gregor, who studies at Napier University, said.

“Having a coaching team headed up by Fergus Pringle here is really good because he is very detailed and from the Sprint Series onwards, the pack, in general, have worked hard at being consistent and being able to really give the team a good platform to build from.

“The results in the Sprint Series gave us all confidence and we have managed to take that form into the Championship, although we know that there are many tough games to come and we are remaining focused and ready to go.

“Boroughmuir are next up and that is what we are focusing on just now.”

So, how did Ryan join Gregor in the Super6 squad?

“There had been an internal Scotland under-20 wider squad game earlier in the year and Fergus Pringle had been one of the coaches involved around that time,” Ryan, who has just started studying at Napier University, explains.

“We kept in touch after that and, after Currie’s season finished, he was keen to get me involved with the Super6 squad which was great to hear.

“Being involved in the Sprint Series was good for me because it allowed me to get to know all of the guys and see the intensity they trained at.

“Everyone was very welcoming and of course, we won the tournament, so it made me want more of it after the summer away with the under-20s.

“Coming into the Championship season we are in right now, I was keen to just keep building after a busy few months and the squad have taken things up a notch and we have been going well.

“I was pleased to geta try off the bench in our last game against Stirling Wolves and we have now reset ahead of the second half of the season when we know that other teams are going to push us hard.”

The second half of the FOSROC Super6 Championship campaign begins this Saturday at home to Boroughmuir Bears at 1pm.