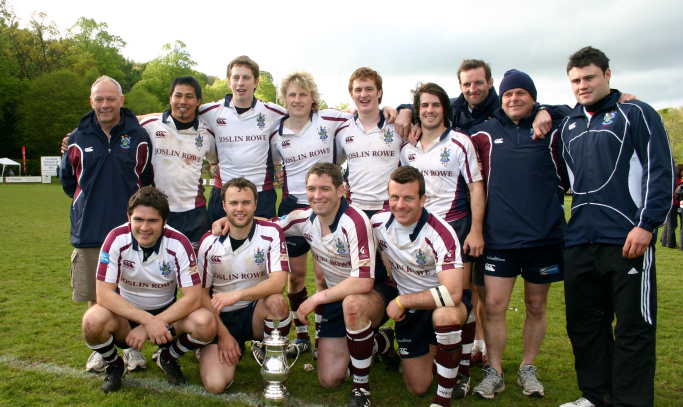 Read about the time 11 years ago when WFC first won the Kings of the Sevens title...

It is 11 years ago when WFC first won the Kings of the Sevens title - here we hear from former 1st XV skipper Torrie Callander about being part of the squad that brought the silverware to the capital:

For some time before I joined Watsonians in 2004 the club had been fully committed to the Borders sevens circuit in pursuit of the coveted 'Kings' title. In fact, I understand that Watsonians were the first non-Borders club to win Melrose Sevens shortly after its inception.

With players such as Darren Burns, Colin Gregor, Neil Cochrane and Andrew Turnbull featuring in the early 2000s, ‘Sonians won a lot of tournaments, but success in the 15s arena meant that the club was always a little late to the party come Spring and didn’t have time to accumulate the necessary points to win the overall title.

After a challenging 2008/9 15-a-side season we were able to focus on sevens much earlier than usual. We had also been allowed to play a stronger, if not full strength, side at the Autumn tournaments meaning we went into the Spring with some points on the board (10 if memory serves me correctly, which made a huge difference). The combined effect was that we knew we were in with more than a sniff of finally winning the Kings that season.

True to form… we had a terrible start in the Spring, losing in the first round at Gala on a very wet and cold day. From then on, however, we built some momentum and made it at least to the semi-final of every other tournament. At Melrose we were beaten in the last play of the semi-final by ultimate winners the University of Johannesburg largely because I was rounded comfortably by their lighting fast winger for him to score the winning try.

We won two of the Sunday tournaments, Earlston and Berwick, pretty convincingly which is quite remarkable when you consider the Saturday night drinking pedigree of some of the squad members.

Eddie Howe, our Kiwi scrum-half, was outstanding at Earlston and we showed a real team effort to beat Melrose in the final at Berwick. We were also runners-up at Peebles and Jed so built a four medal haul by the end of the season.

The core make-up of the squad was stable through the Spring with guys like Gavin Brown (playing his 728th season of sevens for the club...), Mike Ker, Jamie Blackwood, Richard Minto and I all fairly well versed in the abbreviated game. We also had some excellent young blood in future international sevens stars Mike Fedo and James Johnstone, as well as still-at-school flyer Grant Somerville.

Several others played their part too, including Jayden Thrush, Guy Hills and Max Learmonth, but it was the consistency built around six or seven players that made the difference, I think.

So, in the end it came down to Jed where we needed to make it to the final in order to win the Kings title. We were up against long time rivals and reigning Kings, Selkirk, in the semi and won it thanks to a late score from Tupu Saena. Tupu had actually replaced me as first choice hooker mid-way through the campaign which was an excellent decision from coaches David Harris, Burns and Andrew Ker given that he was a lightning quick winger in the 15s team and could do things that I certainly could not, such as pass off both hands and run 15 metres without having to stop for a cigarette.

The Jed tournament was also notable as it featured ex-internationalist Marcus Di Rollo for about 12 seconds of the final. Marcus was helping out in a coaching capacity, but when Jamie Blackwood went down with an injury before the first tie (nerves), Marcus put on his boots.

He avoided taking the fielduntil the last minute of the final when he came on and scored a try, much to the annoyance of everybody in the crowd who felt we had played a 'ringer'!

We lost the final to Hawick who had a 16-year-old called Stuart Hogg running the show. Losing the final was little matter to us as we had done what we had come to do by winning the Kings title. We were the first side from outside the Borders to achieve it and for some of us it had been a long time coming. The club has since gone on time win several of these titles but there was certainly a sense that we broke the mental block that first time and it will long remain a great memory.

I caught up with a couple of the players and coaches as I was putting this piece together and thought it best to quote them directly as they gave their memories of the win.

Captain Mike Ker, who played in every tie of the campaign yet managed not to make a single tackle, said: “It was the culmination of three or four years worth of concerted effort. Having the same guys playing and training (with the odd exception) and having lost narrowly in the previous two years meant we were in good shape. It also laid the pathway to the success we had over the following 10 years and a general acceptance of the club on the circuit. Great memories.”

Gavin Brown, who had actually ditched the club for the money that Lasswade were offering but returned for the glory of the sevens season, stated: “ After trying for some 14 years to win the Kings and being bridesmaids more times than I care to remember, I was gutted when we finished second the year I left the club. I was delighted then when I was accepted back to play sevens in 2009 where we were the first Edinburgh side to lift the trophy. I was delighted beyond words to do it with such a great bunch of boys.”

Coach and long-suffering kit orderer David Harris said: “From the early days of sevens we were involved winning many tournaments with some of the country’s finest exponents of the game. It felt right then that we were became the first non-Borders club to win the Kings title in 2009 after many years of effort on and off the field.

"As a collective the 2009 team was much greater than the sum of its parts. There was skill in abundance but, perhaps most importantly, there was a genuine camaraderie and desire to work for each other. A winning mentality and a dogged determination followed and in a time of strong competition we became the team that was most difficult to beat and that nobody wanted to play against.”

Coach Darren Burns was asked for comment but only actually contributed to the WhatsApp group to say: “I think I played one of the Sunday tournaments and still ran more than Torrie did in the whole season.” - Dennis Carmichael is checking the accuracy of that comment and we will revert...