Feature: ​Davidson delighted to be back 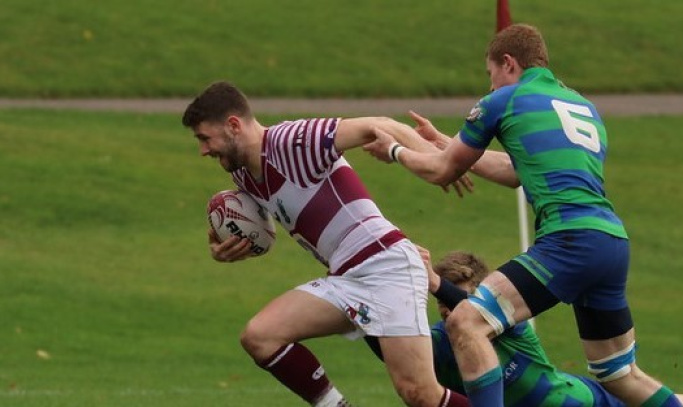 We catch up with Club XV player Ally Davidson...

The Club XV may have lost to Heriot’s Blues last weekend in the Tennent’s National League Division One clash at Goldenacre, but everyone of a maroon and white persuasion was delighted to see Ally Davidson back after long-term injury.

The winger, 22, had played his first 40 minutes of rugby since January the previous week for the second XV against Kelso and bagged two tries on his return to the top team last Saturday.

Ally’s Watsonians journey started in April 2015 when he was just finishing school at George Watson’s College.

He played a sevens tournament for the second VII at Penicuik and then played a number of tournaments for the first VII on the Kings of the Sevens circuit.

“It was a really good experience learning from experienced players in that team and it showed me the level I needed to get to ahead of playing senior rugby regularly,” Ally explained.

“I then left school and joined the club and mainly played for the second XV in my first season with a few outings for the first XV.

“The first XV won National One and it was good to be a part of that and since then I have been around the club playing for the firsts and seconds and playing a part in the sevens set-up.

“Winning the Melrose Sevens in 2018 was something really special and a day I will not forget for a long time.”

Ally did not play in the April and May section of the third Kings of the Sevens success earlier this year because in January he suffered a knee injury.

“It was in a game for the second XV against Hamilton and my right knee just twisted the wrong way,” Ally, a Queen Margaret University student, explained.

“I knew it was quite bad at first, my target was to try and get back for the sevens in April and May, but it soon became clear that was not going to be possible.

“I didn’t have to get an operation, but I had torn my meniscus in two places. I had to knuckle down and rehab for a while and it was great to get back and play 40 minutes for the twos against Kelso earlier this month.

“Then I got 70 minutes or so at the weekend for the firsts at Heriot’s and I just want to keep building from here as my fitness slowly gets better.

“We just started very slowly against Heriot’s and they made us pay in the first half.

“We got a bit of a talking to at half time [by head coach Bruce Ruthven] and played much better in the second half as we lost 45-24 in the end.

“I know from having watched them earlier in the season and having played with them on Saturday that there are some cracking young players in this squad and we just have to work hard as a unit to make sure we stay switched on for 80 minutes in games.”

This Saturday the Club XV head to Hartreemill to take on league leaders Biggar who may well have former ‘Sonians Craig Borthwick, Rory Hutton and Mark Bertram in their line-up.

Get down to Myreside on Saturday, November 23 and see the Club XV take on Boroughmuir at 3pm