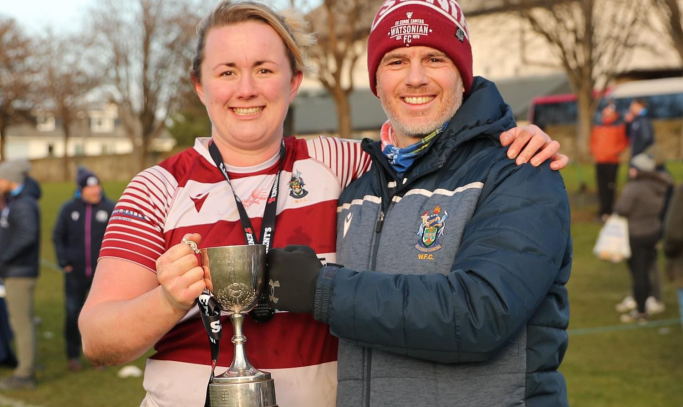 Women's Head Coach Freddie Main has announced he will be leaving the team.

Watsonians Women's Head Coach Freddie Main has announced that he will be stepping down from his role with immediate effect.

The head coach's time at the helm will be remembered for delivering the Women's team its first and second premiership titles and reaching a Sarah Beaney Cup Final.

Freddie Main took charge of the Watsonians Women's team in July 2019. Since his appointment, the team has achieved unprecedented success in the nearly three pandemic disrupted seasons, including a Sarah Beaney Cup final and back-to-back Tennent's Premiership Titles.

While on the field, the impact has been evident for everyone to see the changes and focus off the field are where his legacy will be felt most.

What's clear from speaking to those around the team is that there is a togetherness that has been cultivated by the coaches and players' shared values.

The focus of these values is something Freddie was clear about early on in his tenure. "My initial targets were twofold: Performance and Wellbeing. The players and I dissected what it meant to play for Watsonians and what this would look like in terms of shared values. We distilled the discussions down to the W.F.C values of Welcoming, Family & Committed, which, to us, translated to Be Humble, Team First & Work Hard."

Cait Abernathy agrees that bringing the team together was the most significant feat Freddie achieved "I think the biggest impact Freddie has had as a coach is bringing a family atmosphere to the club."

Abernathy continued, "Many of our players are not originally from Edinburgh, and this sense of family has caused the players to be a very tight-knit group. The closeness and level of trust the players feel for each other off the field translates onto the pitch and has meant we are always playing and winning for each other and not just ourselves."

Once those values were instilled, the coach knew he had the team on board; after all, asking the team to set the standards gave them ownership. "Once we knew who we were off the field, we knew what we had to do on it."

The results were clear. In the 2019-20 season, the team had an extended unbeaten run that had them never field the same starting team twice. The whole squad of 40 players was involved, including ten new faces.

With the team in such good form, it was little surprise when four of its players appeared in the national jersey across the Autumn Internationals and Six Nations.

In that title-winning season, the team scored 940 points while only allowing 160 as they dominated most teams they faced.

Then the pandemic hit and with the team on a high, Main didn't want to let the momentum subside, despite the legal restrictions around training. After getting his head together with senior team members, Charlotte Runcie was charged with developing an online training programme, allowing the team to keep working together and not lose too much of the positive momentum.

Post pandemic, the team's start to 2021-22 was a little slow as the team dealt with a turnover of players (senior players moved off for jobs and opportunities to play south of the border).

But the slow start was just a new place to begin and offered the team the exact thing they needed to evolve and reach another level. "We lost our first game since 2019, after a poor performance against Cougars, but this, along with a loss later in the term to Stirling, proved to be one of the best things that could have happened to what was very much a new team", Main stated.

Main also notes the importance of the loss on a team not used to losing, "Learning while you are winning is a privilege; learning when you lose is a necessity." In his own words, Main noted that the team's last league match in November against Hillhead/Jordanhill was the "most complete performance to date, but also a starting point for a new team that would become settled and play some of the best rugby the club has seen."

When asked what he feels was his greatest achievement during his stewardship, Main says, "I'd say winning the Premiership then backing it up the following campaign with a vastly different squad." He continued, "That and the positive culture within the section."

But Freddie doesn't see this as the end of his impact on the women's team. Multiple times in our conversation, he discussed his time as head coach and how he was always preparing the team for his departure.

"I'm not patting myself on the back here. I want to watch this team grow and succeed over the next few years, seeing these players take on bigger challenges and play at International level. Then I'll know I did a good job." Main said.

One of the significant ideals the coach brought with him was the use of video analysis to improve the players and to give the team the best chance to win.

Main spoke about his belief in video analysis to push the team, saying, "I've really tried to drive video analysis." The coach continued, "At the end of that first season, I said, look, we've got all these videos here. I showed them how to make playlists and said put your best bits together as a playlist. Two people really bought into it. One of them was one of the most improved players because she'd engaged with video analysis. She'd learned so much about the game and about herself as a player."

The second player complied game footage and sent it to teams, securing a contract with a Premiership team in England.

So, what of the timing? Why is now the right time for the head coach to take a step back?

It's an easy answer for the Scotland Touch coach "When I came in, I had a clear idea of what I wanted to do, and I'll not know if that was successful for another few years. I always knew that it was about putting the foundation in place, like every Sunday. When the game starts, I have to sit back and let the team play. If I've done my job, they know what to do on the field."

For Main now, it's about knowing the club is in a place where it can grow "we have great players, a positive culture and a very bright future. Whoever comes in next comes into a team who off the field is very strong and they can then add to that foundation. "

Ultimately with so many people at this level of sport, it comes down to time for Freddie. There's no point if a person who knows if they can't give it 110%. He also realises his health and career need some of that time, too, as he continues to grow his business, Oak and Black.

But this is far from the end of his association with the club as the coach continues to work with the School's U16s team and says openly (we can hold him to this), "If I won the lottery, I'd be back in a heartbeat."

So from everyone at the club, Thank You, Freddie Main, for all you've given and for the fantastic times you've helped the Women's team achieve.

This feeling is repeated throughout the club, but better to say it than one of the team, Cait Abernathy "It has been a great few years with Freddie as head coach and he leaves big shoes to fill for his successor. The whole club would like to thank Freddie for his time and effort over the last few seasons and wish him the best of luck for the future."

We all here at Watsonians have our fingers crossed for that lottery win for you. Thank You. 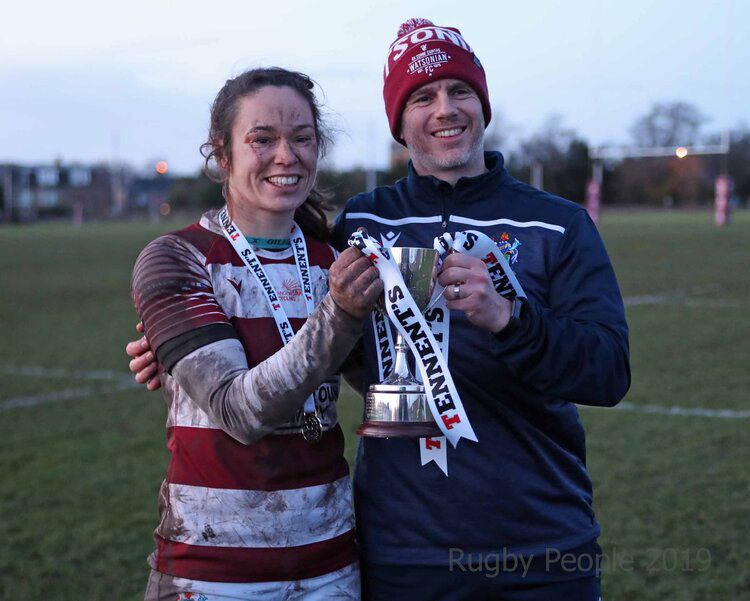 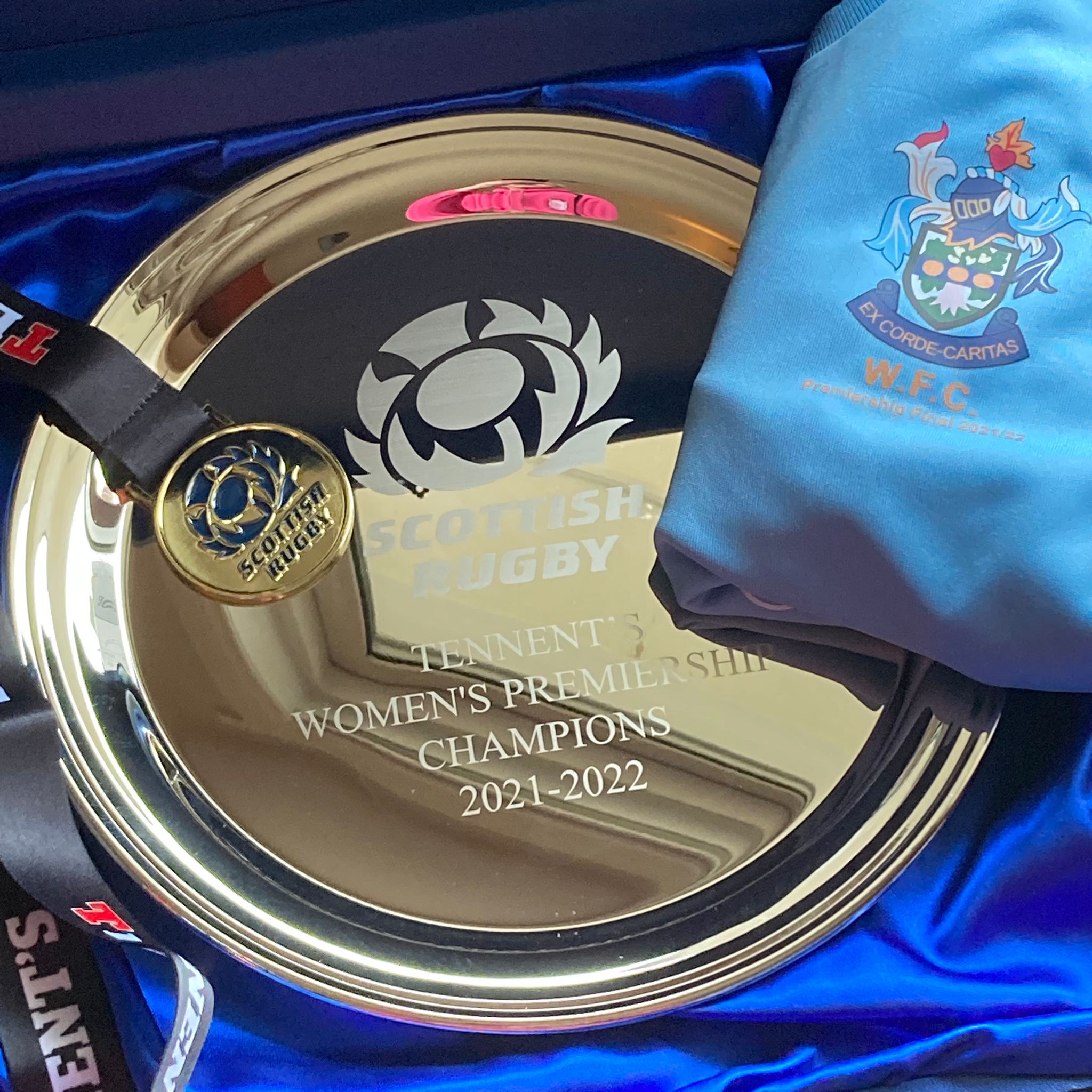