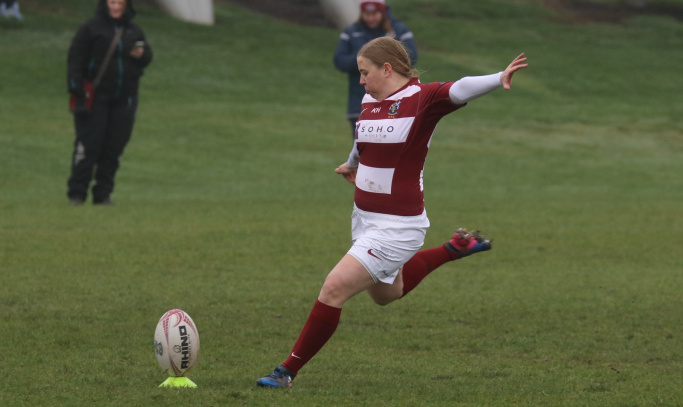 Ladies XV skipper Nicola Nightingale has been involved in some big games in her career to date - and Sunday’s Sarah Beaney Cup semi-final with Heriot’s at Myreside will be another one.

In the men’s game, Watsonians and Heriot’s have been rivals for many years, but in the women’s game Heriot’s are a new team this season.

Despite being newcomers, they have some experience in their squad though and have been impressive so far in the Cup, getting through their pool and then defeating Howe Harlequins 42-8 in last week’s quarter-final.

As a result, Nicola and co are preparing themselves for a tough 80 minutes, but they too have been in good form of late.

“To make the Sarah Beaney Cup final in 2018 was a big thing for us,” Nicola, who normally plays stand-off and has previously played for Scotland, said.

“In the first 10 or 20 minutes of that game the occasion maybe got to a few of the players against Hillhead/Jordanhill, but we learnt a lot from the defeat at BT Murrayfield and just a few weeks later defeated the same opponents in the Premier Development Cup final.

“That spurred us on to really focus and move the team forward and in the league before Christmas we played some good rugby to finish as runners-up behind Hillhead.

“We haven’t had that many games since the turn of the year, but the girls have all been working very hard in training and against Corstorphine last weekend we played some decent stuff in tough conditions to get through to the semis.

“Heriot’s have done well since they came on the scene and we will give them the respect they deserve, but we have to really focus on our own game and being clinical and if we do that then we know we can perform well.”

In the quarter-final, the Ladies XV defeated Corstorphine 43-7 with winger Charlotte Runcie leading the way with a hat-trick of tries.

Nicola has been impressed with Charlotte’s return to form after serious injury while youngsters like Abbie Baillie and Chloe McCue have fitted in seamlessly.

“Charlotte has done amazingly well, she is a very talented rugby player and a big part of our team,” Nicola said.

“The young players these days are coming in with no fear and we like to think we have created an environment that allows them to come in, be themselves and play some good rugby."

“Up front the pack has really been coming on well. Led by the likes of Scotland cap Lana Skeldon and Molly Wright from the front-row the guys in the forwards are becoming a very good unit.

“Competition for places across the board is also keeping everyone on their toes and our collective focus this week is the match against Heriot’s at the weekend.”

The Ladies XV, who reached the Sarah Beaney Cup final last year, are playing Heriot’s in the semi-final of this season’s event on Sunday at Myreside at 2pm - all support welcome.