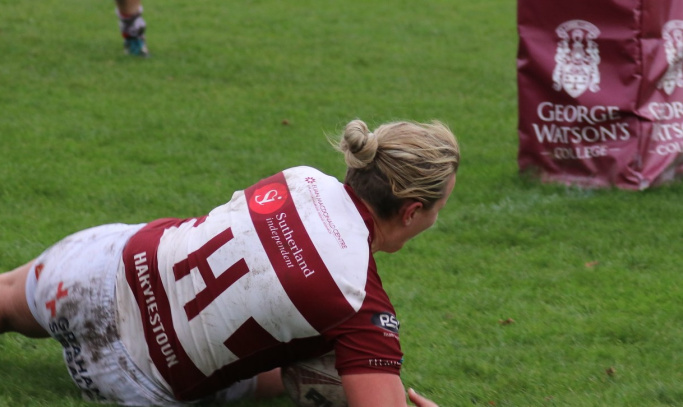 With a few players in new positions and the return of some familiar faces, the team managed to make it eight wins from eight in the league after putting nearly 100 points past Ayr at the weekend.

A transition from the wing to second-row by Nikki Brown - tested for the first time on Sunday - seems to have been a very wise move indeed, with spectators at times left wondering whether the mallet-like blows being delivered to opposition forwards were being meted out by fellow scrum-cap-topped-team-mate Rachel Bragg, or someone managing to dish out a very impressive amount of damage on her first outing with the pack.

Birthday girl Alice King’s stint in the front-row, rather than her usual spot at eight, may not have lasted the entire match but she certainly put on a show while Charlotte Runcie made a very welcome return to the side on the wing, bagging an almighty four tries and the woman of the match accolade from Watsonians.

Also tearing through to four tries of her own was the predictably brilliant Megan Gaffney, followed on the leader board by Emma Evans whose pace and power brought her two tries.

Issy Drexler delivered another barnstorming performance that won her the title of woman of the match from the opposition. Throughout she managed to deliver crunching hits alongside some terrific offloads the likes of which Quade Cooper would be pleased with.

The first 20 minutes of the game stand somewhat in contrast to the remainder. Watsonians found themselves having to dig deep to enforce their game on a determined and dogged Ayr side, buoyed up by some big hits bestowed on the maroon and white side by a women-of-the-match-winning performance from the Ayr number eight.

Had they the stamina to keep up the standard shown in the first quarter, the rest of the match would likely have looked very different. Ayr’s determination to build their game is clear though and just as their senior squad continues to develop, the club is future proofing itself with a growing youth section.

Glasgow’s Hill Jills host the women’s team next week on Sunday, November 10 and although a few days after bonfire night, this will certainly be a game where fire is met with fire. A force never to be underestimated and with a particularly strong pack, Hills will once again provide the biggest test for a Watsonians side hungry to the challenge.

Meanwhile, Nimmo herself returned to action in the match and her team mate Charlotte Runcie wanted to say the below:

We were hugely proud of the resilience shown by Sarah to make her return in maroon and white. Despite her lengthy return process, she looked as sharp as ever and brought energy as soon as she stepped on the pitch.

Last time Sarah played, she joined me in captaining the squad that gained promotion back into the Premier League. As two players who have frequently had to stand on the sidelines, so it was quite emotional to see her back and for us both to throw a ball about.