Feature: Bain focused ahead of second half of the league season 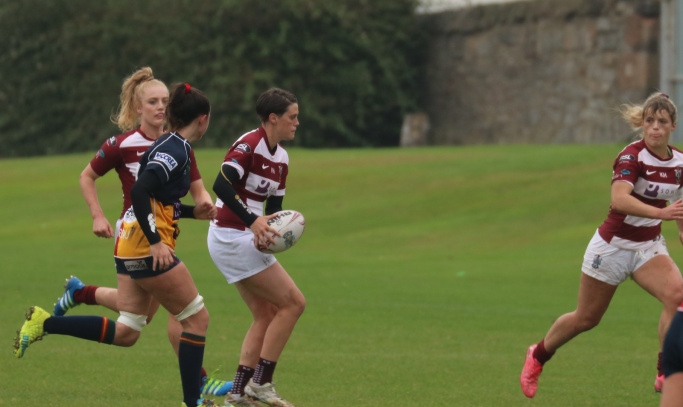 We catch up with Women's XV player Claire Bain...

The Ladies XV start the second half of the Tennent’s Women’s Premiership fixtures on Sunday with 25 points from a possible 25 in the bag.

A fortnight ago they put in a cracking display to defeat second placed Hillhead/Jordanhill 38-17 and now they want to kick on over the coming weeks.

First up is Corstorphine at Myreside and Freddie Main’s charges are getting ready for a tough 80 minutes.

No one knows that more than centre Claire Bain who played for Corstorphine, then known as Royal High Corstorphine, for a number of seasons.

Having first played the game at Howe of Fife and then Morgan, Bain joined RHC when she moved to Edinburgh and spent many years there before spells at Murrayfield Wanderers and Heriot’s.

She has played for Scotland at XVs and sevens and after a spell out of the game to refresh herself last term, Bain joined Watsonians in the summer and has not looked back since.

“I knew a few of the players at Watsonians before I joined the club and liked what [head coach] Freddie Main had to say about what the team were looking to achieve this season,” the 29-year-old said.

“Since I went down to training for the first time I have really enjoyed it and the great thing in the squad is that there is strength in depth so everyone is pushing each other on to get better."

“We had some good results in the first five games of the season, but we know that we have achieved nothing and after the week off we have to get ourselves right back into it against a good Corstorphine team.

“I know a lot of their players so it will be good to see them, but I also know that they are a strong side and we have to get on the front foot in this one early on.

“We are all determined to keep the winning run going, but we all know that that will only com with hard work and if we play to he high standards that we constantly set ourselves.”