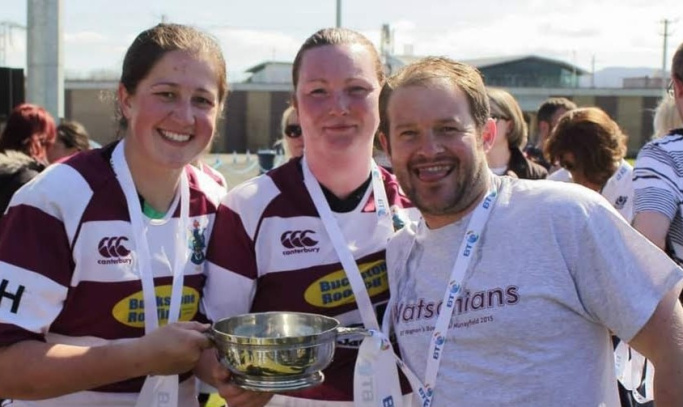 We catch up with Women's XV Team Manager Amanda Byrne...

Amanda Byrne has been a key part of the Women’s section at WFC since 2003 - and having grown up in a town called Wexford in the south east of Ireland she always looks forward to this rugby weekend too.

Scotland take on Ireland on Sunday, March 14 in the Six Nations and Amanda said: “Scotland v Ireland weekends are the best and the worst of times, since I have moved I have been lucky that Ireland have pretty much always held the upper hand in this particular contest.

“I don’t remember too many defeats, but Scotland are starting to come into their own now which makes me a bit more wary of them, plus I’m Irish, we always expect to lose and then it’s such a great party when we get the nice surprise of winning!

“I don’t get much grief from the rugby crowd when we lose actually, I tend to get more stick at work, that’s because they are mostly soccer fans there and just jump on the bandwagon whereas rugby folk actually give a considered opinion - usually! - and acknowledge the faults and failings as well as the good plays of both teams.

“With this year’s game being at Murrayfield, that has usually meant a close scoreline in recent years.

“Ireland haven’t started well in this year’s Six Nations and the win against the Italians won’t have given them any false hope, but it was nice to get the ‘W’ under the belt. I predict Scotland to win by five points - and I can only be pleasantly surprised if we manage to turn them over.”

Amanda got into playing rugby when she went to university in Waterford.

“My first coach there was John Fogarty who went on to coach Leinster and Ireland, he had a massive head of hair on him then I remember and fair play to him taking on a women’s team that had never played before. We won the Irish university championship in my second and fourth years, so good times.” she said.

“While at uni, I also played for the local team in Waterford called Waterpark, then I moved to Dublin for work placement as part of my course and played with Guinness Rugby Club.

“They had formed historically from the social society of Guinness brewery and still required a nomination and a seconding from a member of the brewery to allow you to play. Luckily, I worked with a guy who had involvement at the brewery and he nominated me and got one of his friends to second it and I was in.

“The clubhouse only sold Guinness products at the bar, it was like a western movie when I asked for a pint of Heineken, I swear there was a stunned silence!

“I trialled for Leinster when I was there along with another girl from the club and we both made it into the Leinster squad.

“When I finished work placement and went back to Waterford for my final year of uni I kept playing for Guinness too, so my schedule rugby-wise was busy each week, but I really enjoyed it.

“After I left uni and went to Dublin full-time with work I had to leave Guinness as Leinster had introduced a rule that you had to be in a Prem team to play for them, so my last team in Ireland was Old Belvedere.” BBQ meeting: How the journey to WFC began

Amanda moved to Edinburgh in 2003 and, after meeting someone who knew then WFC Women’s XV player Mary Pat McFarlane at a BBQ, she was soon thinking about heading along to training at the club.

“I did a bit of ‘googling’ and at the time I almost joined Lismore as that was the name of the ground that my first team Waterpark played at, but I thought I would give Watsonians a go first and that was that really,” Amanda recounts.

“I rocked up to Myreside one July evening, there was a cricket match on and no sign of any rugby. I wandered into the bar and there were two elderly gentlemen on the balcony who were very polite, but a touch confused when I asked them about ladies rugby, they had to have a right good think to remember if the club actually had a ladies team before finally deciding that, if they did, they would be over at Craiglockhart.

“I finally got over there and was late for my first session.

“My highlights from over the years don’t centre around the silverware that we have won, but my highlights are from the times like games where we only had 13 players to put on the pitch, but still went and gave it all we had against teams who wouldn’t drop numbers to match us even when they were well beating us.

“Or when new players came along and you saw them go from not really knowing what they are doing at all to scoring tries against top teams, that was certainly Susie Roy who then went on the play Touch for Scotland and certainly knows what she is doing on a pitch now!

“We would never stop fighting until the whistle went - I remember us losing badly to Stirling up there and they must have put 50 points on us and in about the 85th minute of play we managed a try with a pick and carry from a ruck close to the line and you would swear we had scored the winning try in a Cup final we were so happy!

“We were so embarrassed by that loss and so ashamed that we had played that badly, so for the return home fixture we insisted on playing it on the stand pitch and called in everyone we could persuade to lace a pair of boots up that had played for us in the previous five seasons.

“I think we put 80 points on them, it was magnificent.

“Long bus journeys to play away games and singing all the way back to Edinburgh also have created a few great memories.

“It’s those kind of things that I count as highlights, medals are pretty nice as well, but medals tarnish, memories of good times don’t.”

As a seasoned WFC player, Amanda has been on her fair share of tours with the club too.

“Tours are always special,” she recounts.

“I’ve been lucky enough to win both Islay and Mull a couple of times with Watsonians as well as the Colonsay 10s with a hybrid team that we put together.

“Again highlights are from off the field incidents, missing the ferry myself by a few minutes and having to camp in the ferry terminal car park and sleep in the car, losing the keys to the car while on the ferry to Mull and having to do three trips on the boat before the keys were found and the car could be taken off for example!

“Also lots of singing, lots of dancing, lots of midgie bites, lots of vomit - they all blend into one really.

I would say the friendships I have made through the club are very important, results and victories eventually fade from memory and there’s always ‘the next game’ to prepare for and ultimately those wins or losses just become statistics on a website somewhere.

“The things that really sticks in your mind are the times with your friends - for example freezing cold training nights in the depths of November and I would like to say sweltering fitness sessions during pre-season except I had a good habit of avoiding pre-season (takes the edge off my game…).

“Also, things like the message after a game to say you have done well or the midweek meet up for a few drinks, those are the things that matter ultimately.

“The heartaches are just as memorable as the good times in a bittersweet kind of way, you remember them just as well.” 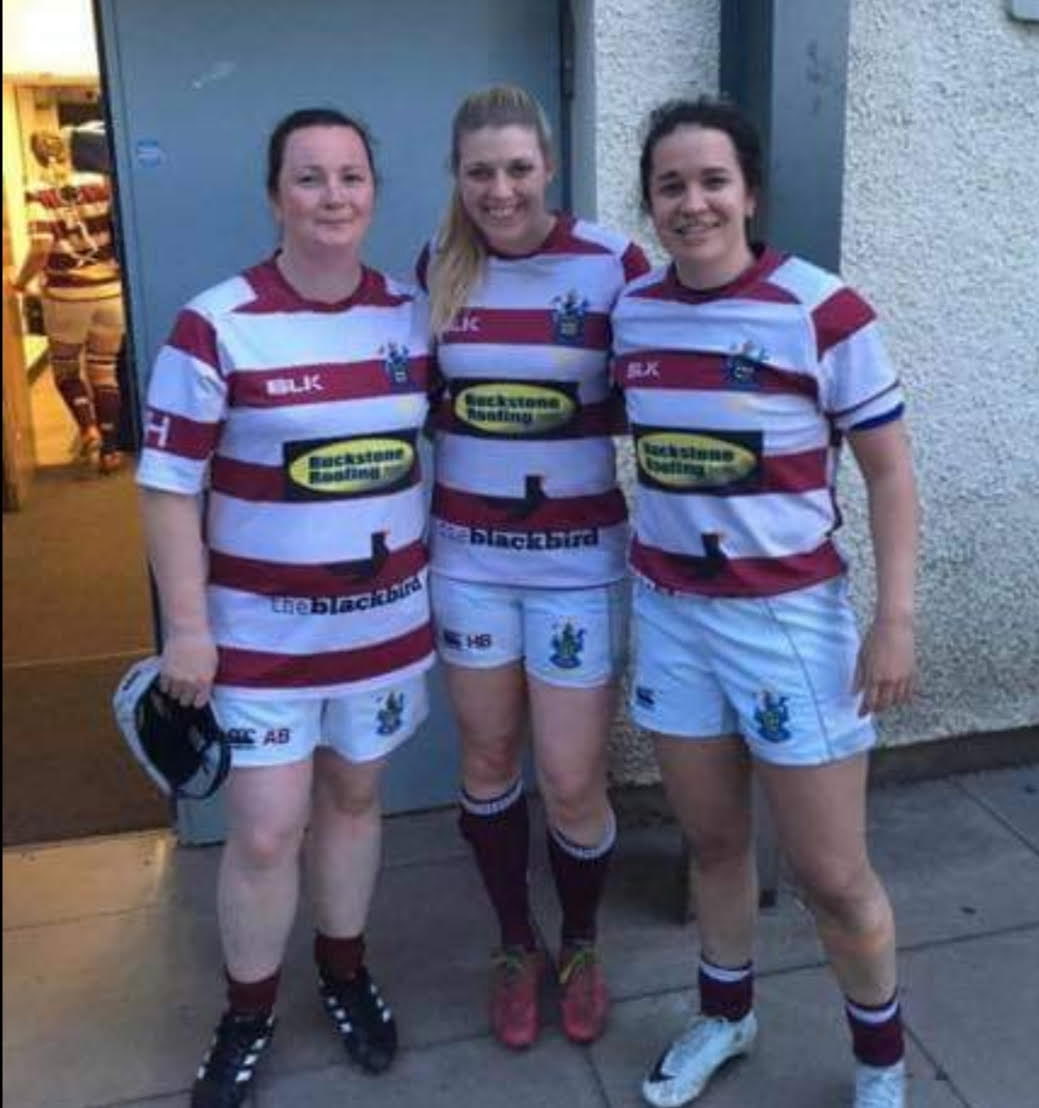 After a few false starts at retirement, Amanda’s playing days have been officially over since 2019.

She states: “In 16 years at Myreside and 22 years playing total, I worked my way through every position in the team - except 10!.

“Now I have moved into the role of Team Manager, it’s a new role for the Women’s XV, but Freddie [ Main, the Head Coach] asked me to come back and take on the role when he returned to coach the girls [in 2019] and I was happy to stay involved.

“And I’d say to any young players thinking of playing rugby, come along and show us what you can do and don't worry because we have definitely seen worse than anything you can throw at us and the only direction to go is up from there.

“What’s the worst that can happen?”