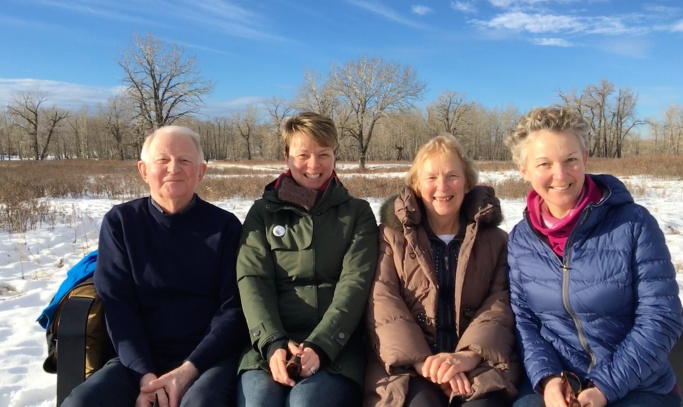 We catch up with the fascinating Jim Seidler...

Jim Seidler now lives in Toronto in Canada, but he will always be a proud Watsonian and he played his part when the 1st XV won the unofficial Championship in 1969/70.

He was not on the pitch during that season, but he was the club’s unofficial Historian at the time.

“They were an amazing team to watch, watching them and keeping stats on all the players and such like gave me great pleasure,” Jim, who turns 80 in May, said.

“Peter Gallagher, Allan McNish, Ian Robertson, Graham Young and others were brilliant players and when the team was on song they really were hard to stop.

“However, we were beaten by Heriot’s at Myreside late in the season and we thought our chances of winning the title were gone as rivals Melrose still had another match to play against Langholm at The Greenyards.

“I was the only Watsonian who was down there for that game and amazingly Langholm won which meant that Watsonians were champions.

“It was the days before mobile phones of course so after full-time I ran home to my house in Melrose where I lived at the time and, breathlessly, phoned my good friend and well-known Watsonian Mike Barrie to tell him, he was very chuffed!

“Fast forward to 1998 when the 1st XV won the top flight title at The Greenyards and Mike phoned me to tell me over here in Canada - I was over the moon.

“I may be thousands of miles away now, but Watsonian Football Club means so much to me.”

“My early life revolved around George Watson’s College and Myreside”

With an uncle that attended George Watson’s College, Jim had links to GWC and WFC from an early age.

“I was born in a house in Morningside Park and my family had houses over the years in Morningside, Merchiston and Craiglockhart so my early life revolved around George Watson’s College and Myreside,” Jim recounts.

“Travelling to my grandmother’s house in Craiglockhart we often went through the grounds of the school from the Tipperlinn gate to the Gillsland Road gate.

“My father worked throughout the Second World War at Scottish Widows in St Andrew Square. When he was free, having played rugby himself as a youngster before eyesight issues, he would put me in the pram and take me down to Myreside to some of the very few wartime rugby matches.

“So, from an early age I knew about Watson’s, Watsonians and rugby and when they asked me why I wanted to join the school at my interview family legend has it that I said ‘because I want to play rugby’!”

Just before he joined GWC, the school 1st XV was skippered by Graham Ross and soon after Norman Munnoch was the Captain.

Both of these men went on to play for Scotland, four times at stand-off and three times at hooker, respectively so it shows you just how good the school side were back then.

In Jim’s day rugby started at the school in the year called Five Middle Junior and his first ever match was an away fixture against Kirkcaldy High School.

“The Rugby Master was Jim Smith and Bob Hay was the Master in Charge of our team,” Jim said.

“My happiest memory of playing rugby at school was a match against Merchiston Castle at Colinton. Merchiston played very well in the first half and were beating us, then their Master in Charge was heard by us saying to our Master in Charge at half-time ‘your boys aren’t giving us much of a game today’ - it was the best team talk my team mates and I ever had!

“That riled us up so much that we went on to win the match and one of my team mates that day was Mike Barrie who was a lifelong friend.

“I was about 5 foot 8 and 11 stone, so I was a versatile player, but wing forward was my preferred position.”

As he got into his later years at school, Jim stopped playing and concentrated on following the school First XV and watching Watsonians.

On leaving school in 1960 Jim joined the Royal Bank of Scotland and also did a CA apprenticeship.

For a spell he turned out for the WFC 3rd XV - “brilliant times in a social side” - whilst also played rugby for the Royal Bank team and has fond memories of turning out once in the annual fixture for the latter against Melrose at The Greenyards.

“That evening the Melrose ladies - who donated the Ladies Cup which is played for at the Melrose Sevens - were sitting in the south end of the stand and they were giving me some stick,” Jim laughs.

“And when I went on to live in Melrose they would remind me about it and how I had frustrated them by stopping Melrose’s star man Mike Cipolato in that game.”

“Playing at The Greenyards was a privilege.”

And at Myreside, Jim met many friends who he would keep in touch with for years even after he moved to Canada in 1974.

“The social side of the club was very important while I also made good friends for life from other clubs like Colin Blaikie at Heriot’s, Robbie Kemp at Edinburgh Accies and many people from Melrose because I went to live there,” he explains.

“Watsonian Football Club itself was extremely sociable. We always had a great time in the clubhouse at Myreside after the matches and then we would often go to The Golf Tavern in Bruntsfield which was full of Watsonians on a Saturday night.

“We also had club dances in the Minto Hotel in Newington and they were always well attended.

“I went with the club to Twickenham for a tour to watch England against Scotland in 1965.

“Scotland were leading 3-0 in the Calcutta Cup match [thanks to a drop goal by stand-off David Chisholm] before, in the dying minutes, England won the ball in their own half and their winger Andy Hancock ran the length of the pitch to score a try and grab a 3-3 draw.

“Dennis Carmichael was the Tour Manager and we were staying in a nice hotel on the Cromwell Road. On the Sunday morning he got on the bus and he said to me ‘Jimmy, as a player would you come into the hotel to thank the staff?’.

“Of course, I did that and the Manager of the hotel said to me ‘when we heard we had a booking from a rugby club we took out extra insurance because we thought that rugby clubs usually cause damage, but you guys have not caused any’ - we had had a good tour, but maybe we should have partied harder!

“Seriously though, the people I met through Watsonian Football Club were amazing.”

Jim also went to Scotland matches regularly and said: “I was at Murrayfield in 1951 when there was the famous 19-0 win over Wales, the Welsh team had 11 Lions in it, they had won the Grand Slam in 1950 and just before this game they had thumped England [23-5].

“The ground was packed out - there were 80,000 in the stadium including around 20,000 Welsh - and the atmosphere was amazing.

“The Scotland Captain Peter Kininmonth kicked a massive drop goal and that spurred his team on to one of the best performances I ever saw.

“Donald Scott of Watsonians was playing in that match and I loved watching him, a lovely footballer.”

“The best performance by a Watsonian team in my memory”: Beating Cardiff in 1953

Mention of the legendary Donald Scott, who turned 93 this week, brings us neatly on to the best players Jim ever saw in maroon and white for WFC?

“Dougie Crighton was a great full-back, in December 1951 Melrose came to Myreside and were undefeated and Watsonians beat them 11-3 with Dougie the star of the show,” Jim states.

“He tackled Charlie Drummond, who scored many tries for that Melrose side, every time he attacked and that was the basis of that victory and Dougie was on the fringes of a Scotland cap, but never got one.

“Lawson McKill was an excellent player, Donald Scott of course, Bob Keddie who earned one Scotland cap against New Zealand in late 1967.

“Bob was extremely fast and very powerful, Roger Baird senior was a cracking player, Norman Munnoch hooked for Scotland and deservedly so, Eric Low was solid, Clifford Hastings was mobile and tall and I just loved watching those guys play.”

And the greatest Watsonians performance he ever saw? Well, that is easy.

On November 21, 1953 Cardiff defeated the All Blacks at their famous Arms Park ground 8-3.

It was recorded at the time that ‘Cardiff’s victory over the All Blacks was and ever will remain one of the finest games of all time’.

“Five weeks after defeating New Zealand, on December 28, Cardiff welcomed Watsonians on the annual Christmas tour of South Wales,” Jim recounts with a smile as we chat on Zoom.

“For the match with Watsonians, Cardiff made two changes, G. T. Wells in place of G.M. Griffiths and P. Goodfellow in place of S. Judd who was at Leicester to play for the Barbarians.

“This was a powerful Cardiff team of talented players, 10 of whom played for Wales and six for the British Isles. However, in a festive atmosphere Watsonians defeated Cardiff by 13-5.

“In the 1950s, to defeat Cardiff at the Arms Park was a pinnacle of rugby football achievement.

“Simply the best performance by a Watsonian team in my memory.”

Jim is pictured with Fiona his younger daughter, Jennifer his wife, and Gillian his elder daughter. The photograph was taken in January 2019 in Calgary, Alberta. During her schooldays Jennifer lived in a house which overlooks The Greenyards and her next door neighbours included Helen Lawrie who married Lawson McKill

If Jim's story has made you keen to get involved and volunteer with the club, we would love to hear from you, please contact Club Administrator Fi Sharman on info@watsoniansrugby.com