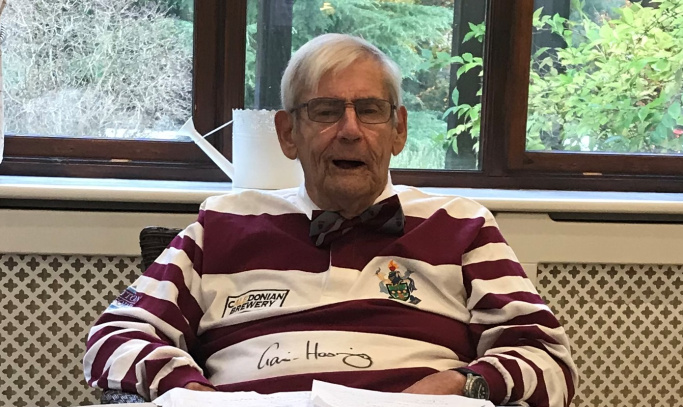 ​The club was delighted to hear from Malcome Livingstone recently...

The club was delighted to hear from Malcome Livingstone recently.

Malcome, who now resides in a care home in Ascot in Berkshire, has always taken a keen interest in the goings on at WFC and was on the look out for a club bow tie.

Thanks to the help of president Euan Kennedy and fixtures/referees secretary Brian Urquhart we were able to send Malcome one and he is pictured wearing the bow tie as well as a Watsonians jersey signed by Gavin Hastings.

Malcome attended George Watson's College from 1950 to 1952 and his brother Ian boarded while he went on to the naval school with his father in Malta.

Ian was captain of the first XV 1955 and he was also a house vice-captain.

Malcome said: “I played for the 2nd and 3rd year at rugby. I represented Bomber Command and Herefordshire at full-back before retiring due to flying commitments.

“I was fortunate enough to have a long and successful career in Mathematics, lecturing at Exeter University before retiring and then volunteering for Devon Air Ambulance .

“It has given me such pleasure to receive the bow tie - and feel connected to Watsonians - particularly in these uncertain times.

“I wish you all a merry Christmas and successful new year.”

Malcome also made a donation to the club and we hope he and his family have a great festive period and continue to spread the word about WFC!