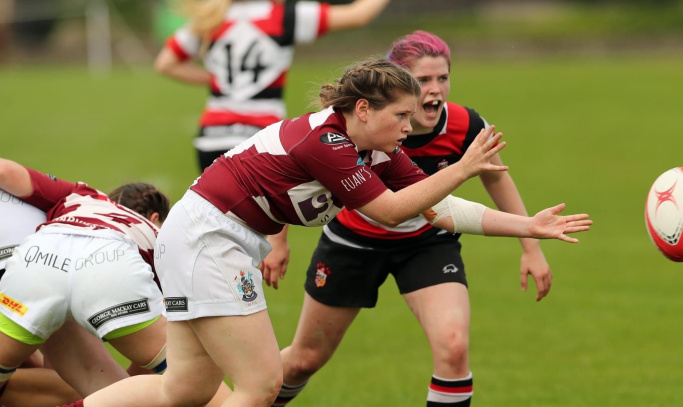 We caught up with Women’s XV scrum-half Charlotte Harris…

Heading into the weekend’s match away to Heriot’s Blues, the Women’s XV are top of the Tennent’s Premiership table.

To date, under new Head Coach Bruce Millar, they have notched up bonus point wins over Cartha Queens Park and Garioch, as well as securing a losing bonus point as Stirling County edged them out.

Over the last few years, the Women’s XV has been known for giving exciting young talent their chance to shine in the top flight.

One of those types of players who has started all three competitive matches so far this term is 19-year-old scrum-half Charlotte Harris - so how has her rugby journey brought her to this point?

“I am from Strathaven and was at school at Strathaven Academy when one day one of the girls said they were going to head along to the local rugby club to try it out,” she explains.

“A few of us went along to Strathaven Rugby Club and I really enjoyed the training, so I ended up playing a few games at under-18 level for them and then I moved to Hillhead Jordanhill and played a season there.

“Next up was a season at Biggar, still at under-18 level, and I was continuing to love my rugby at that point.

“What really kept me interested in rugby was that everyone was really kind and welcoming from the first training session I went to at Strathaven and that has been the case since at all of the clubs I have played for so far - I’ve made some good friends through the sport.

“My dad is a big rugby fan so I had always had the sport in my life, but from the age of 15 or 16 I have played it and it has become a big part of things for me.”

Charlotte left school in the summer of 2020, but because of the pandemic, there was quite a gap until she was able to play senior rugby competitively.

She knew Watsonians player Ailie Tucker and, as a result, got involved with the club ahead of the 2021/22 season, making her debut in the 25-22 away win at Heriot’s Blues in September 2021.

“The step up to senior rugby was quite an eye opener for me last season and I just tried to learn from all of the players around me at Watsonians,” Charlotte said.

“A big role model for me is Rachel Law and it was great to work closely with her last season and learn from someone like that.

“I am very lucky to be surrounded by helpful people like her and the game time I got last year helped me to put into practice a few things and start to feel comfortable at the Premiership level.”

Sadly, towards the end of last season Charlotte fractured her elbow against Cartha and was out for quite a spell, so she is delighted to be making up for lost time in 2022/23.

“I feel like I have come back stronger and I am glad to be playing my part for the team,” Charlotte, who works at Ark Vets in Coatbridge, adds.

“We have lots of new faces and a new coach and the league is very competitive, but Bruce, Briar [McNamara, the Captain] and Kaeli [King, the Vice-Captain] have created a great culture and everyone is having fun and growing as a group, so long may that continue.”

The Women’s XV’s match away to Heriot’s Blues is at 2pm on Saturday and, after a spell on the road, they are next at home on Sunday, October 16 at 2pm versus Cartha Queens Park.