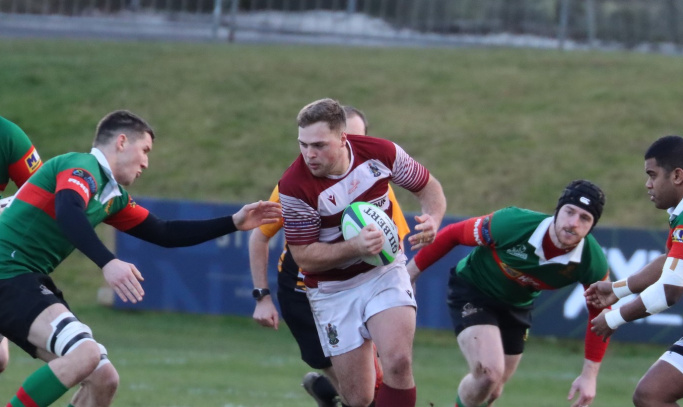 We catch up with 1st XV skipper Stuart Allison to look back on the season...

The 1st XV league season came to an end in early April and it is fair to say it was a campaign of ups and downs, but the new-look squad really stuck together well. built up a good team spirit and stayed up - all of which bodes well for 2022/23.

The young players involved with the 1st XV have to be congratulated for the way they went about their business and their safety in the second tier was confirmed on April 23 when Cartha Queens Park lost to champions Heriot’s Blues to be relegated along with Boroughmuir.

After 22 games the team finished on 30 points with four wins, a draw and 17 losses under their belts to end up 10th in the 12 team Tennent’s National League Division One table, but those basic stats do not tell the full story.

Remember, 2019/20, a season that was cut short when the pandemic came in March 2020, was the first one since the club had been awarded a spot in FOSROC Super6.

During that campaign it was the first time many of the Watsonians players had played top team rugby and then when the first lockdown came the Scottish Rugby-run leagues were null and voided.

There was then a change to the coaching structure with Andrew Bell taking on the post of 1st XV Head Coach.

Andrew did a great job, alongside other coaching staff members and Team Manager Stan Buchan, to keep things ticking over while there were no matches.

At the start of 2021/22, Andrew had built up an exciting wider 1st XV squad, but then he relocated down south and Assistant Jason Riley took up the mantle and, once again, many of the squad were playing their first ever senior rugby.

“We got off to a slow start in the league, but it had been a tough two years for everyone and I was one of the older ones in the squad,” Captain Stuart Allison, a back-row who is now 24, said.

“There were a lot of new faces to gel into the squad and in the first few weeks it really was tricky for everyone, but I never saw the heads go down and that was something that gave me real hope as Captain.

“It could have been easy for some of the younger boys to be on the back foot and doubt what we were doing but they stuck with it and then Jason took over from Andrew.

“Andrew was an excellent coach and so is Jason, the latter puts in a lot of work behind the scenes and I think we have seen since we got our first win over Boroughmuir [who are now relegated having finished bottom] just how much that extra work has paid off.

“It is the little details that he feeds to players that help while that victory at Meggetland [36-29 on November 27] gave everyone a boost and belief that we could compete in this division.

“From then until Christmas training went really well and we managed to really start 2022 with a bang.

“Going into the new year we knew we had to string some positive results together and, with three home games back-t0-back early on, we managed to do that.

“We beat Cartha 35-19 on January 15 and then backed that up with another bonus point win over Highland seven days later.

“In that Highland game [32-25] we really had to defend well at times to keep them out, but we also scored some cracking tries in attack when we got the chance and I was very proud of the squad that day.”

The third of the three Myreside matches on the spin was against title-chasing Gala and although the other Maroons came out on top the team had given themselves a chance.

A 31-21 home win came in early March against Ayr while there was also a 31-31 draw up at Stirling County on March 18 under the Friday night lights.

The last point - a four try bonus - gained came in a 39-31 loss to title-chasing Heriot’s at Goldenacre on April 2.

Stuart, a Project Manager with Field and Lawn, said: “It has been an honour to captain this young and enthusiastic group, everyone has given it all they have got and that is all you can ask for.”

So, where did Stuart’s rugby journey begin?

Having grown up in Melrose, he played for The Greenyards club from when he was five until under-18 level.

“I loved my time playing at Melrose, I got to work under Jim Telfer and we won the Borders League at under-18 level which was great,” Stuart, who then played for Stirling University and Stirling County before arriving at Myreside ahead of the 2019/20 season, states.