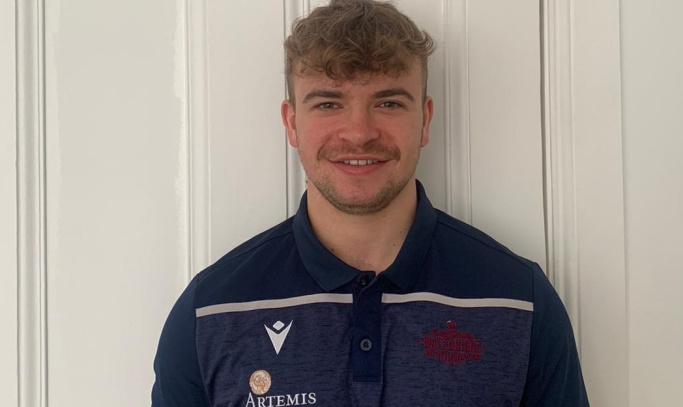 We catch up with young player Struan Wells...

There may not have been any competitive rugby at Myreside since March 2020, but lots has been going on behind the scenes to help young players prepare for when the sport does return.

Ist XV Head Coach Andrew Bell and his Super6 compatriot Fergus Pringle have worked very closely together to make sure that players have remained fit, focused and fully engaged at the club.

And one of those players who has benefitted is 18-year-old full-back Struan Wells.

He has been training regularly with the rest of the 1st XV hopefuls - when restrictions have allowed - since he left Merchiston Castle School last summer.

The teenager, who is just finishing up his first year studying sport & exercise science at Edinburgh Napier University, has also been able to train with the Super6 squad at times too to give him a taste of that environment - and he has loved every minute of his involvement with Watsonians so far.

“When I left school I was always keen to continue playing rugby and put a lot into it and when I spoke to Director of Rugby Chris Hunter and others involved with Watsonians it seemed like the right place for me,” Struan explains.

“And that has certainly proved to be the case, I have loved the spirit that Belly and the other coaches and support staff have built-up at the club training sessions and we have all spurred each other on to keep going and remain focused until matches come back.

“Every block of training we have had in the last few months has been varied and kept us on our toes while it has been great that Fergus has allowed me to get involved in some Super6 training, there are so many good players in that environment that I can learn from.”

So, how did Struan’s love of rugby begin?

“I grew up in West Linton and I played rugby there through primary school and then continued playing when I went to Peebles High School for both the school and the Peebles club,” he explained.

“After that I went to Merchiston for my last two years of school and rugby has always been the sport that I loved, I did athletics and others on the side, but rugby was always the main one.

“I enjoyed my rugby in Peebles and then at Merchiston I feel like I learnt a lot rugby-wise because even though I was injured in my lower sixth I was able to work with guys like Matthew Currie, Jamie Dobie and Dan Gamble who have since gone on to play professionally while, in my last year, we played nearly a full XVs season before the pandemic hit.”

Before he came across Currie, Dobie and Gamble, Struan had grown up with Patrick Harrison, another West Linton lad who has turned out for Edinburgh Rugby at hooker a couple of times this season despite being just 18.

Struan has represented the Borders and Edinburgh at age-grade levels and we look forward to seeing him play in maroon and white when rugby does return later this year.

If you are a young player and this article has made you keen to get involved with WFC, we would love to hear from you, please contact Director of Rugby Chris Hunter on chris.hunter@watsoniansrugby.com