​Feature: Seven up for Anna as she refocuses for top of the table clash 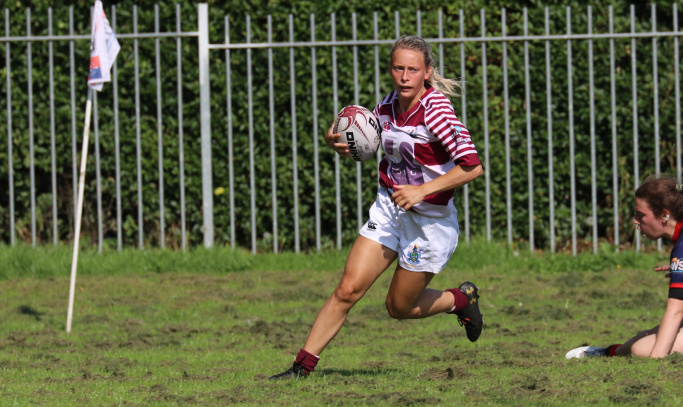 Anna Forsyth has had her injury problems over the last couple of years, so the sight of her showing great pace and skill to score SEVEN tries for the Ladies XV against Ayr last weekend was great for everyone of a maroon and white persuasion to see.

The 20-year-old winger from Peebles stole the show in the 142-0 Tennent’s Premiership triumph by scoring 35 points herself.

The victory was the Ladies XV’s fourth out of four matches so far this term and they are level on 20 points with last year’s champions Hillhead/Jordanhill at the top of the table.

The two top women’s club sides in the country are now set to meet at Myreside this coming Sunday as the league season reaches the halfway point.

Forsyth hopes to be able to play her part and said:“I used to play hockey and take part in athletics, but a few years ago I was keen to try something new and headed down to Gala initially just to throw the ball about and have some fun really.

“From there I was selected to train with the Scotland under-18 squad and then the under-20s so a couple of years ago I decided to join Watsonians so that I would be playing my club rugby at a high level.

“I have loved being at the club since then, everyone has been so welcoming, but in the last two seasons I have been hit by quite a few injuries. I tore cartilage in my knee, I dislocated my thumb, I had a throat problem that needed sorting, so it has all been a bit ‘stop start’, but I am enjoying this season so far and just want to play as much rugby as I can.”

Forsyth, who currently works with her family who run a butchers and bakers, is looking forward to the Hill Jills test in a few days.

“It should be a great game, both teams have started the season really well and have quality players throughout the squads,” she stated.

“Obviously we beat them in the Sarah Beaney Cup final last season, but they are the reigning league champions and they are a strong team.

“We have to focus on what we can do and we want to keep the momentum built-up from the last few games going.

“The buzz at training at the minute is great and we are all enjoying our rugby and learning more about us as a group every time we meet up.”

Get down to Myreside on Sunday to see the Ladies XV play against Hillhead/Jordanhill at home.