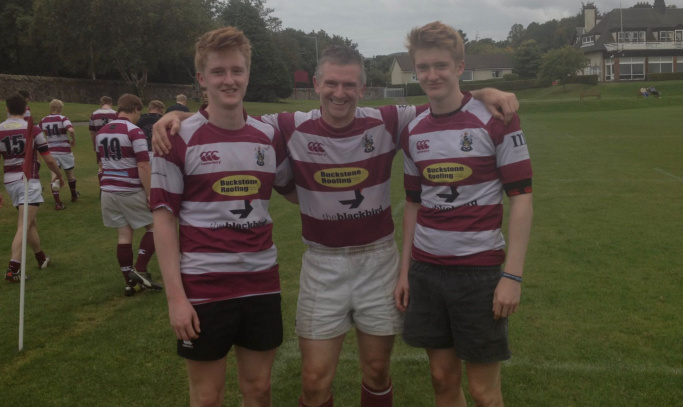 They famously say that two things certain in life are death and taxes, but it is fair to say if you are involved at Watsonian Football Club then you can throw another one into the mix…

It is a certainty that, come rain, hail or shine, Aly Campbell will be working hard all week during the rugby season to get a 3rd XV out on the pitch for the following Saturday.

With the advent of WhatsApp and Messenger and the like in recent times, there are more ways than ever to get in touch with people and Aly has a contacts book bursting at the seams of players who have turned out for the club in the past.

Each week he will work and work until, by Thursday evening, he has a full matchday squad to give to club legend Dennis Carmichael for WFC records.

Even between the Thursday night and the Saturday afternoon at kick-off time that squad can change two or three times as call-offs and ‘the dog ate my homework excuses come trickling in.

But, more often than not Aly, with help these days from former 1st XV skipper Fergus Henderson and Euan ‘Robbo’ Robertson, will have a starting XV and a bench ready and primed for kick-off and it is always great to see the team spirit amongst the eclectic group that pulls on the maroon and white jerseys at that level.

He has a full-on job with Aegon and has a family as well as other commitments, but over many years he has always made time to help pull together the lower men’s XVs at the club, and for that, we very much thank him for that.

In the exciting FOSROC Super6 era at Myreside, it is as important as ever that we have a number of strong amateur teams representing the club and Aly is one of the many volunteers who make sure that happens.

“Some weeks it can be a bit more complex than others to get lower XVs out on the pitch, but I must say since the pandemic we have had great numbers of social players down at the club - young and older! - and that bodes well for the future at Myreside,” Aly, now 56, said.

“Andrew Bell before him and now Jason Riley have done an excellent job with the 1st XV getting a lot of new faces in and that has had a positive knock-on effect on the 2nd XV who, in the last few months of last season, were able to get strong squads out.

“You only have to look at their result against Melrose [a 33-26 home win over the league champions at Myreside in late March to become the only side to beat the Borderers in 2021/22] to realise what talent there is in that 2nd XV squad.

“That has meant that in the thirds, we have had good numbers mainly, but at times games have had to be called off because opposition have not been able to field a side.

“That is always disappointing when you get a late call-off, but that is a bigger problem to deal with in Scottish rugby and all we can try and do at the club is keep our social players engaged.

“In recent times we have done that by playing modified Touch on a Wednesday night and it means that those who just want to play more socially are not just acting as tackle bags for the firsts at training.

“The Touch initiative has definitely worked and having the clubhouse back since the turn of the year has also been good because guys have been able to socialise more.”

Over the years Aly, a prop by trade, has played alongside more players than even he can remember in the club’s lower XVs, but two players he does remember are Adam and Colin Campbell.

That is because they are his twin sons and there have been a couple of occasions in the last few years when the trio have been on the pitch at the same time while his wife Carlye has been a great support.

So, when did Aly’s links with the club begin?

“I left George Watson’s College in 1983 and I think my rugby career had peaked when I played for the 1st XV there,” Aly said.

“We had a good school team and I was playing in the front row, and our coach Donald Scott told me that if I didn’t start doing weights I’d be too small in senior rugby.

“Well, I never did start doing weights and he was proved absolutely right!

“I did play some firsts rugby for the club in my early years out of school while I had a few years down in London where I played for London Scottish, but since I returned to Myreside, I have played mainly in the seconds downwards and, in the main, loved it.

“You meet so many people in the social teams and it is always a good feeling getting a full squad out on a Saturday, getting a good win and then enjoying a couple of pints afterwards in the clubhouse.”