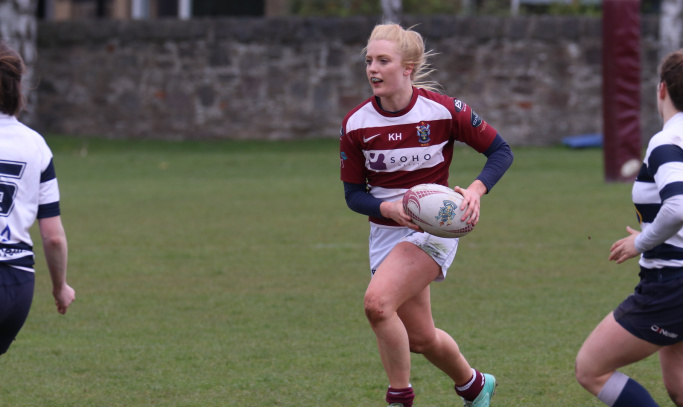 As the Ladies prepare to face Hillhead Jordanhill in the final of the Sarah Beaney Cup this weekend, Gary Heatly catches up with former Hills player turned 'Sonian, Megan Gaffney.

Over the years, Megan Gaffney has been lucky enough to play in a number of Sarah Beaney Cup finals for Murrayfield Wanderers and Hillhead/Jordanhill.

However, since she returned from travelling in the southern hemisphere back in October, her home has very much been at Myreside and the 27-year-old cannot wait to run out at the national stadium with her Ladies XV squad mates this weekend.

The Scotland XVs and Sevens cap said:“When I was returning to Scotland after being away I wasn’t sure where I was going to be playing my rugby, but I knew a few of the girls at Watsonians and heading down to train with them was one of the best decisions I have ever made.

“I knew that the team had reached the Sarah Beaney Cup final last year, so I expected a good standard of player in the squad and I was not disappointed.

“During the shortened league campaign we came together pretty well and played some good rugby at times, particularly in the last game when we beat Hills at Myreside.

“The Cup has been a bit ‘stop start’ since the turn of the year, but I thought we played some really good stuff against Heriot’s in the semi-final because they are a decent side with a number of experienced players.”

Megan is comfortable playing in the centre or on the wing and with the likes of her, Charlotte Runcie, Bryony Nelson and Emma Evans in the backline, it now has a dangerous look to it, especially with captain Nicola Nightingale likely to be controlling things from 10.

“We do have a really exciting backline and we all like getting our hands on the ball, but we know the hard yards that the forwards put in to get us into such positions,” she explained.

“The thing that has really impressed me of late has been the way that the young players have been coming on and really making their mark on the team.

“I have been lucky to play in a few finals before and I will be saying to the newer players before Saturday to just enjoy the experience and trust in our game plan.

“Hills are a very good side, but so are we and it should be a really competitive final on Saturday.”

The Ladies XV are taking on Hillhead/Jordanhill in the final of the Sarah Beaney Cup this Saturday at 5.45pm at BT Murrayfield - all support welcome while the game is also on BBC ALBA