​Match report: Sonians do Highland fling to hang on for win 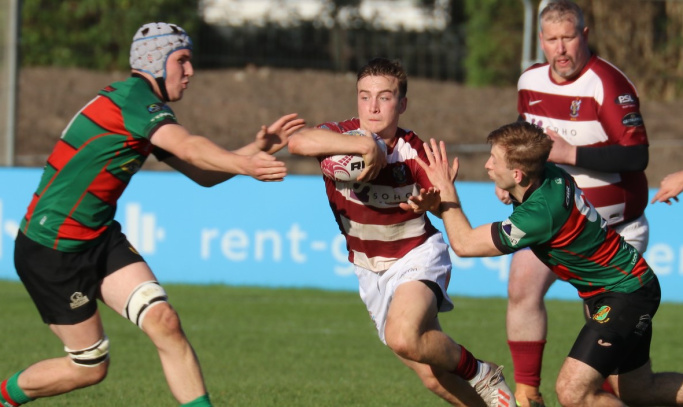 A lovely autumn day at Myreside promised a feast of rugby for those who could drag themselves away from watching the World Cup on TV.

Highland, our visitors, buoyed by an easy victory over us in the Cup, arrived early and appeared confident of victory. Their confidence was not misplaced as they opened the scoring with a lovely try that owed much to good support play and crisp passing and this was easily converted to give them a 7-0 lead.

We came back however, and the burly full-back Kerr Stoddart was soon over for the home team which he easily converted to make it 7 apiece.

Highland were not to be outdone and as befits a team which has played together for a few years showed good cohesion to add another try and a penalty to move them on to 15-7.

As at Cartha last week, our mistakes were allowing our visitors to gain momentum, field position and possession this was especially true of our kicking game and straightforward tackling.

Highland took advantage of this again with another simple try in the 34th minute to extend their lead to 20-7 and we were looking in disarray.

Back-row George Kyriazi on debut had other ideas and showed a remarkable turn of pace for a former prop to get on the end of a neat passing move and go over in the corner after at least a 25 metre run. Stoddart converted and we approached half -time at 20-14 to Highland.

We pressed again and Highland conceded a penalty in the shadow of the posts which we wisely chose to convert to close out the half at Highland 20 Watsonians 17.

No drastic changes at half-time and we opened the second half brightly and Van Kacori went over near the posts to take us in front for the first time at 22-20.

Stoddart having a bit of curate's egg performance with the boot missed the relatively straight forward kick which would have given us some breathing space.

We continued to press however, but in truth the remainder of the half was stodgy fare for the most part. Highland had most of the possession, but huffed and puffed to no effect. The cohesion and team work which was so evident in the first half deserted them as a combination of strong defence on our part and handling errors combined with poor decision making on theirs allowed time to run away from them.

In saying this they were camped in our ‘22’ for the last few minutes of the game and squandered a four man overlap which would have given them all the points. Watsonians stuck to their task manfully and caused them to make another handling mistake.

A scrum for us followed by a series of forward drives took us to the edge of our ‘22’ and with the referee having signalled last play, centre Thomas Klein received the ball and sent it clear into the grounds of the Royal Edinburgh Hospital amid scenes of much joy at Myreside.

A remarkable transformation from our opening game in Inverness on August 31 when we were well beaten.

The team look like they are beginning to gel and play with an idea of what the coaches want from them. In saying that we make too many mistakes which simply gift the opposition possession and this needs addressed.

We also need to add a bit of consistency as we are going from away loss to home win and cannot yet put together two wins in a row. We were not helped by late call-offs this week, but these things happen to all teams and it allowed Sam Nicholl, Kyriazi and Logan McKenzie to make their debuts for the club, well done boys and let’s hope there is a lot more to come.

Congratulations to our Super6 team, to our second XV and to our 12 boys from the third XV who joined up with six boys from Inverleith to play against the Caledonian Thebans. All teams won and were then joined on the Sunday by the table topping Ladies. Well done.

Thank you to all our supporters who made the clubhouse a lively place on Saturday night.

Finally, and with much sadness, our thoughts and condolences go out to Rehan Baig and his family following the passing of his grandfather. They have our prayers in this difficult time.