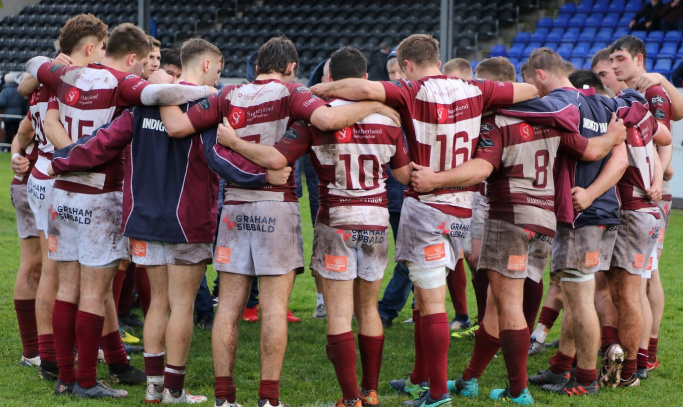 A cold autumnal afternoon at Goldenacre with the sun streaming down, but without any warmth which was exactly how most Watsonian supporters felt at half-time after a miserable half of what had been, up to that point, a one-sided contest.

The game kicked off at 2pm in front of an eerily quiet crowd, most unlike previous city derbies which tend to be raucous affairs. Heriot’s had two players on the pitch in Stewart Mustard and Graham Wilson, who individually have each played more first XV matches than our whole squad combined and this experience was much to the fore in the first half as Heriot’s monopolised possession and field position.

Added to this was a desire by the home team to keep the ball alive and attack from every part of the pitch and they scored tries regularly with forwards and backs combining nicely to punch holes in our defence. Their set piece was strong which gave them a lot of front foot ball and they capitalised on it running in five tries in the first half and converting three of them to go in at the break with a 31-0 lead.

We hadn’t turned up, we weren’t fired up and we gave a good Heriot’s side too much respect. Head Coach Bruce Ruthven had some choice words for his players at half-time and we went back out to regain some self-respect.

Bruce’s rocket worked and we held onto the ball for a couple of phases at the start of the half with Stuart Allison running hard and straight from the back-row and giving us some go forward. We picked up our tempo and whilst Heriot’s may have considered the game over centre Thomas Klein crashed over for our first try and full-back Kerr Stoddart converted.

Heriot’s still hadn’t woken up after the break as we moved the ball wide again, kicked ahead and winger Ally Davidson, back from injury, won the race to get the touchdown in the corner. Stoddart could not convert but at 31-12 we were at least giving them a game.

Unfortunately for us Heriots then scored an excellent team try under the posts and took the score to 38-12. We had other ideas though and fought back to get into their half where Davidson rather speculatively kicked ahead, a covering Heriot’s player got to the ball but slipped, he regained his feet and Davidson pushed him back over his line, ripped the ball off him and touched it down for an unlikely score. Stoddart converted from far out and it was now 38-19. In a see-saw second half, Heriots then got the next score, again converted, and at 45-19 all that was left for the visitors was the chance of a bonus score try.

It came after persistent good work by the excellent Willie Thomson, giving a cameo at scrum-half whilst down from Orkney, his chip through was plucked out of the air by fellow replacement Donald Kennedy who rounded his man to get our fourth try and bring the match to an end at 45-24.

A game of two halves without a doubt, if we had played the first half like we did the second then we might have made more of a contest of the game, but that’s life.

We have another tough away trip to table-topping Biggar this week and we simply cannot afford to give them a big half-time lead and then try and reel it back in. Results at the weekend for Cartha and Gala have left us in ninth position in the table and we don’t want to get into a dogfight to avoid relegation.

Beyond a doubt there is a great deal of talent in the team which, when it clicks, will see us chalk up a big victory against somebody, but we keep repeating our mistakes which is careless by anybody’s standards.

A mention to all the teams on Saturday with our second XV winning a tough match at Lasswade and our third XV winning their leg of a triple header involving Inverleith and Edinburgh Northern. Special mention to our Super6 squad who probably confounded the critics by winning away at the Southern Knights.

Thanks to all our supporters who braved the cold to come to Goldenacre and to the Heriot’s medical team who stepped up to help us at the last moment. It is appreciated and not forgotten.