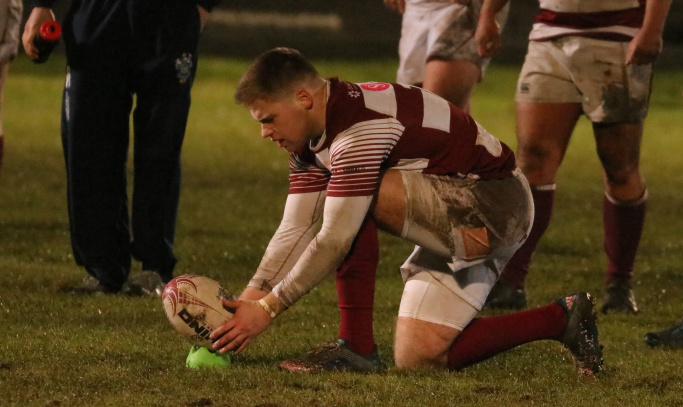 The Club XV kept up their 100% record at Myreside this weekend past with an emphatic defeat of Ayr.

This was just what the doctor ordered after a traumatic trip to Inverness the previous weekend where to add to the ignominy of the score we had to play in Highland's change strip after your reporter failed to check the bag arrived back from the laundry - day one stuff really and pretty embarrassing all round.

To the more recent game and Ayr kicked off and the ball did not go 10 metres, the first in a series of errors that they made on the day. We stuck around in their ‘22’ for a period before conceding a penalty which allowed Ayr to relieve the pressure, from the throw we somehow regained possession and Corann Henderson scooted down the wing and scored in the corner. Kerr Stoddart converted and we moved to 7-0, this was followed by Ayr dropping the ball from a lineout close to our line.

Stuart Allison picked up and started running and kept going up to about the Ayr five metre line where he was tackled, a simple pop-up to Thomas Klein, supporting well, and we were over for our second score, again converted by Stoddart.

Ayr were penalised for a high tackle on Klein and their full-back was yellow carded. Soon after this Klein was through again for his second and our third try. Stoddart could not convert and once again Klein was tackled as he got the ball down, whether it was late or not became moot as Klein had to retire injured and we were 19-0 up.

Ayr's scrum got stronger and we conceded a series of penalties from which they moved downfield and scored a relatively simple try. They converted and made it 19-7 and we then made a series of unenforced errors ourselves as instead of exiting from deep we attempted to either chip over the top or run the ball from our own line.

The result was possession turned over to Ayr and an opportunity for them to score a morale booster just before half-time. The try was on as they moved it along their back line about five metres out, but once again their handling let them down and we were able to clear as the ref blew for half-time.

The half-time chat refocussed the players and the second half was nearly all one way traffic as the home team cut out the errors that had crept into their game at the end of the first half.

The scrum tightened up as did the defence and whilst Ayr scored a further try which they could not convert, we went on to score another four tries, all converted.

First up was a typical forward effort by Man of the Match Angus Small. Then Donald Kennedy - switching between wing and scrum-half -got in on the act. Callum Lauder, now at 8, then got over for our penultimate score and finally a second try at the death for the man who started the scoring Henderson.

From a scrum five metres out, Henderson ran a lovely line to take a pop pass in midfield from Stoddart and went over underneath the posts without a hand on him.

Head coach Bruce Ruthven thinks it is a contender for Try of the Month and I wouldn't argue against it. It is not often we score seven tries against Ayr and there was certainly a sense of a job well done at the end of the match.

This coming Saturday we have a re-arranged league fixture at home against Cartha Queens Park which will kick-off at 2pm.

A few players will be missing due to injury and supporting Scotland in Dublin so it will be a tough ask to maintain our unbeaten home run. If we get the commitment and attendance at training that we had last week then it is certainly feasible that we can stand up to the test a strong Cartha side will pose us.

As always, your support is appreciated by the players and we hope as many of you as possible can drag yourselves away from the television and come and see our young team in action.