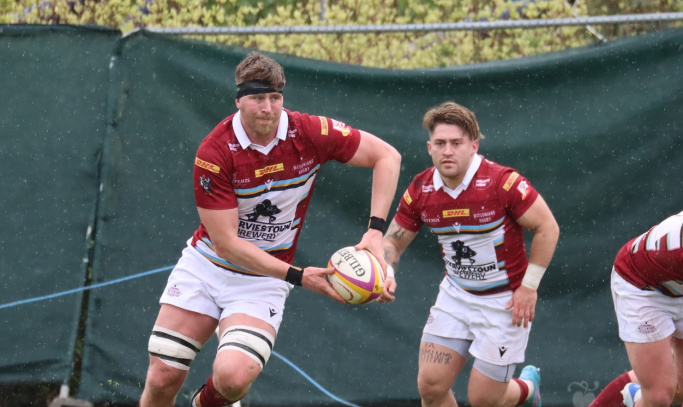 We catch up with Super6 squad member Iain Moody…

Iain Moody is an experienced player on the Scottish club and part-time professional rugby scene and, like all natural competitors, he always wants to be involved battling it out for silverware come the business end of any given season.

And, with two matches remaining of the FOSROC Super6 Sprint Series for 2022, Iain and his Watsonians Rugby team mates are top of the standings.

They won all five of their regular season games and know that positive performances in the play-offs could see them becoming champions.

However, with Stirling County defeating the Ayrshire Bulls with a last gasp drop goal last Friday, the Bridgehaugh men are just a point behind Fergus Pringle’s men.

On June 10, Watsonians host County at Meggetland, but before that they head to Millbrae to play the Bulls this coming Friday (June 3).

As it is the Bulls last game they cannot now finish top, but on their home turf they are a very dangerous side and No.8 Iain knows it is going to be a tough game.

“I have played enough times at Millbrae over the years with Boroughmuir, Melrose, the Southern Knights and now Watsonians to know that if you secure a win there then you have played very well,” the 33-year-old Lasswade High School PE teacher said.

“We managed to win there [29-26] a few weeks back, but the Bulls really came back at us hard in the second half and really made it a close finish.

“That day we played well, but we will have to play even better this time around to get another victory because it is their last home game before the summer break and they always have a good crowd cheering them on at Millbrae.

“After the trip through there a couple of weeks ago it was good to have a weekend off playing to refresh and get ourselves into a good place ahead of the last two games and standards at training have remained high.

“It has been a good Sprint Series so far and this group of players have come together really well under a strong coaching group. We have really enjoyed the last couple of months playing together and we want to finish things off strongly.”

A four try bonus point win at Millbrae would mean that ‘Sonians could secure top spot before the County game next week, but as Iain explains getting a victory of any kind at Millbrae is tough, let alone a five pointer.

Whatever happens over the next 10 days or so, Iain will certainly be seen as having been one of the club’s shining lights during the Sprint Series as he is a very consistent performer.

So, where has his rugby journey taken him over the years and how did he end up wearing maroon and white in recent times?

Well, Iain grew up in Berwick and played through the youth ranks at Scremerston before taking his rugby on at Longridge Towers school and then going on to play senior rugby for Kelso.

A spell at Boroughmuir then followed, helping the Meggetland men to gain promotion back to the Premiership in 2013/14 and being in the matchday squad for the Scottish Cup final triumph over Hawick in 2014/15.

Iain, a Scotland Club XV internationalist, has also been a fine sevens player throughout his career and was involved with wider Scotland squads with injuries coming at the wrong times to deny him outings on the World Series and the like.

After Boroughmuir, he moved to Melrose and added to his silverware collection at The Greenyards before playing for the Southern Knights in the first two Super6 competitions in 2019/20 and 2021.

“I have enjoyed playing for all the clubs that I have been a part of over the years and I knew Fergus Pringle from my time at Boroughmuir when he coached there,” Iain explained.

“Over the years I had some tough matches against Watsonians in the Premiership while since Super6 started what Ferg has built up has been impressive.

“Previously they never looked like a side who knew when they were beaten and we have taken on that trait this year and all of the guys really have worked hard to get us where we are at the moment.

“I think the strength we have coming off the bench has helped us in this competition and I am really enjoying my rugby just now.”