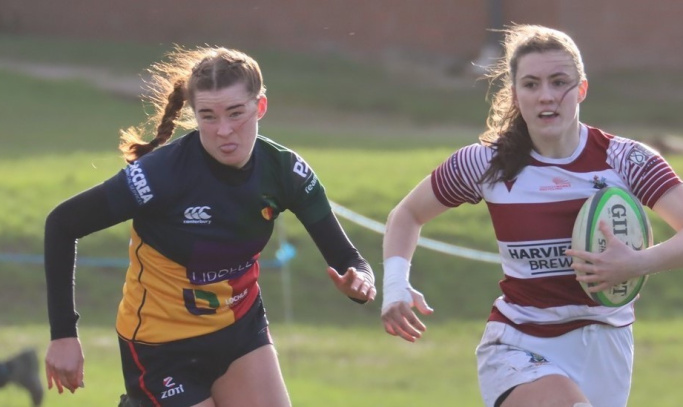 We catch up with Women's XV flyer Francesca McGhie...

Earlier this year, having missed most of the regular season, the 18-year-old winger played in the Tennent’s Premiership play-off semi-final against Stirling County and made an instant impression for the Women’s XV.

The team won 39-0 at Myreside on January 15 in that one and that gave them confidence heading into the final against old rivals Hillhead/Jordanhill a fortnight later also on the M1 pitch.

In front of a good crowd, the Women’s XV played some of their best rugby of the season to come out on top emphatically 67-0 and lift the silverware that they had also won in 2019/20 before the pandemic came.

Francesca showed great pace to score two tries in the first half and added another after half-time to give her a hat-trick to remember while she only missed out on the player of the match award because centre Briar McNamara had bagged 27 points.

“It was amazing really,” Francesca, who is from East Lothian, said.

“I was away down south at university for most of the first part of the season, but once I realised that move was not for me I relocated up here and was straight back down to Myreside to train having got to know the girls well over the last couple of years.

“It was a surprise to be picked to play in the semi-final, but I really enjoyed that game and as well as giving the whole squad confidence that one gave me confidence individually too.

“I think we all thought that the final against Hills was going to be closer than it ended up being, but the whole squad just put in an excellent performance and once we got on a roll in the first half we were hard to stop.

“Getting a try quite early on settled my nerves and to finish with three was quite a feeling, but more importantly the team scored 11 and were able to celebrate with each other at the end.

“Most wingers say it, but I could not have done what I did in that game without great work from the forwards and the other backs around me, players like Briar and others are sio good at communicating out there on the pitch and also creating space and I just tried to be in the right place at the right time.

“Now we are in a Sarah Beaney Cup final and we are looking to complete the double if we can. It will not be easy because Hills will be looking to lift the trophy, but it would be great to be part of the final at BT Murrayfield with this squad, that would be brilliant.”

Francesca missed the Sarah Beaney Cup semi-final win (51-5) over Stirling County at Penicuik on April 24 due to injury, but fingers crossed she will be involved this coming Saturday (May 14) at the national stadium - FREE tickets here

So, how did Francesca get into rugby in the first place?

It was in 2018 when she went along to East Lothian girls training at Preston Lodge’s Pennypit ground in Prestonpans.

“I played lots of different sports at school and did lots of different activities, but by that time I dancing was the thing taking up most of my time as I was involved with the Royal Conservatoire of Scotland,” Francesca explains.

“I was enjoying that, but I needed a change and I had always been much more of a team player because I had played hockey and lacrosse when I was younger.

“My dad used to play while my brother Kyle [a former Scotland under-20 cap who has previously played in the FOSROC Super6 with Boroughmuir Bears] was big into rugby growing up, so I’d always watched him and when my mum found an advert on Facebook for a local girls team I was keen to try it out.

“I fell in love with rugby after my first training session, it brought together girls of different standards and experience from all over the county and it was great fun.

“For the next year or so I trained with the East Lothian girls and we really built up a good squad spirit and such like.

“At that time I was at Loretto School in Musselburgh, but when I moved to George Watson’s College at the start of S5 in 2019 I decided to start training with Watsonians.

“I couldn’t play for the team then as I was too young, but just training with experienced players was great and I learnt a lot before the pandemic came.

“As I said, I had a wee spell away at university earlier this season, but now I’m working at Loretto as a gap student and enjoying my rugby too, so long may that continue!”