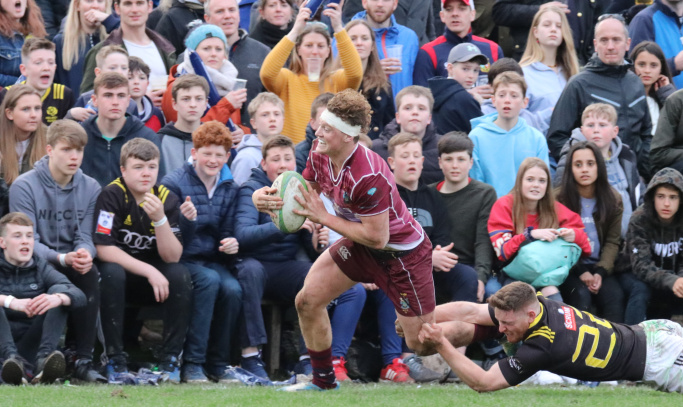 Yesterday we heard about the Watsonians squad that won the Melrose Sevens in 1996 - today, April 14, we mark two years since Ewan Miller’s group lifted the Ladies Cup in 2018.

They then defeated the Crusaders 21-12 in the last eight before a great tussle with Marr in the semi-finals.

They managed to come through that 19-14, having been behind, and the final itself was thrilling.

Converted tries by McKean and Steele had things level at 14-14 against Melrose before McKill squeezed in at the corner for the winning try to spark jubilant scenes after a 19-14 victory.

It was the ninth time Watsonians had won the famous event at The Greenyards and skipper Miller recounts: “We’d made it to the semi-finals, but we certainly hadn’t been dominant. Currie had a team including Adam Hastings and a few Scotland Sevens caps, Melrose had been ripping up each tie with a really strong squad and Marr we’re flying with a really strong team and the Bickerstaff brothers providing the ‘X factor’.

“So, by the semi-final stage we hadn’t really performed at the same level as the other three teams left and Borth was injured so we were down to a nine player squad effectively.

“Against Marr in the semi, they went an early try up which settled their nerves and increased ours. Charlie then got sin binned so we were down to six men for the majority of the first half which is very tough in sevens. We held out well against a lot pressure and went into the break 14-0 down.

“At half-time the boys were knackered, but we kept the belief and we knew if we got one try back then Marr would feel the pressure and that’s exactly what happened. We got one try back, then another and then snuck another try to win the tie.

“We then knew we had a quick turnaround before the final against a Melrose side that had played very well against Currie in their semi.

“We felt we hadn’t played anywhere near our full potential, so the home team were definitely the favourites by this stage and all the pressure was on them.

“The main focus of the team talk going into the final was to enjoy it and make sure we imposed our game on them, possession was everything. The Melrose pitch had been heavy all day and w knew that if we could make Melrose defend for long periods of the game they would be struggling.

“Personally, I had very little left in my legs going into the final. I had played every minute up to that point and went on to play every minute of the final, but I was just hoping I could dominate the middle of the park and the rest of the boys would have enough in their legs to produce some magic out wide.

“When we came out of the tunnel I could tell that we were the most relaxed, you could see the nerves and pressure in the eyes of the Melrose boys and I thought ‘we can win this’.

“At half-time there was a good buzz, we were playing a lot better than we had all day and we were level with the home side that had been destroying teams.

“We came out in the second half and we dominated possession, the decision making from everyone was exceptional and the sevens experience of the team was showing.

“I remember late on Charlie being one on one out wide inside their ‘22’, he managed to bundle free and dot down in the corner. It was one of those ones where you couldn’t see if he had got it or been put into touch, but we all cheered and appealed like mad and the touch judge knew it was a try and it was awarded.

“At that stage I ran to Skeener who was taking the kick. He asked the referee how long there was to go and, with 30 seconds left, he took his time with the kick.

“The conversion was taken and the referee blew his whistle - from there it was pure joy and pride.

“We lifted the Cup, did all the press interviews and then enjoyed a few drinks in the changing rooms and beyond.

“The amount of texts I received after the final was staggering and it opened my eyes to just how special winning the Melrose Sevens is, what a day.”

What the others said…

“To win it was a really special feeling and a moment I will never forget, there is such a history attached to that tournament.”

Andrew Skeen: “The Melrose Sevens has always been the highlight of the season for me and has produced so many memories from winning it in 2006 [with Newcastle Falcons] to exits before noon!

“The highs and lows are incredible and the fact it is so hard to win makes it so much more appealing. I always went into the tournament believing, but in 2018 there was something different, I knew we had a genuine chance.

“Despite the close score lines, I always felt like we were in control and had more to offer when required and so it proved. The feeling when Charlie scored in the corner was incredible and all those years of dreaming and hoping had finally turned into reality.

“It was something I will never forget.”

Craig Borthwick: “It was a special day, a day that I never once thought I’d be involved in, but a day that I will certainly never forget. The feeling at that final whistle when everyone floods onto the pitch is something that an amateur rugby player never gets to experience usually, but thankfully that day we had a very special team together that I was lucky enough to be part off it.”

James Miller: “That was my first time going to Melrose Sevens so I went in completely blind, once we got there and I saw how many people there was I realised that it was a huge deal.

“Once we got through the first tie the boys started to loosen up and started to play. I managed to score a try during the day was which was a huge tick for me.

“Once the final whistle went in the final and we had won the boys erupted, you could see how big this was.”

Scott McKean: “It was just amazing for us, even thinking back on it now brings a big smile to my face.

“Over the years we have had a lot of tussles with Melrose on the Kings of the Sevens circuit, but to play them on their home patch in a final with 99 percent of the crowd cheering them on was just something else.

“It was a really fast game which went from end to end, but I just remember the moment when Charlie McKill gained a crucial turnover and then went down the other end and scored, it was massive for us.

“When the final whistle went it was amazing, but it took quite a long time to sink in!”

Willie Thomson: “The Melrose Sevens is such an iconic event and when I was growing up I remember watching it on TV, so for a boy from Orkney to be there and lifting the trophy was pretty surreal.

“In any sevens tournament you have to scrap to get through ties at times and then you can find your rhythm and what I remember from that tournament is just how hard we battled for each other.”

Ali Harris: “With my dad [David] having been involved in sevens at Watsonians for so long I used to travel with the team when I was younger so I take great pride nowadays in playing sevens for the club and the proud history we have.

“The pride doesn’t get much bigger than thinking back to 2018 at Melrose, you could just see at the end how much it meant to us all and we won’t forget that feeling.”

Ally Davidson: “We knew we had the team to win it, but we didn’t put any pressure on ourselves at all, we just stuck to our game and it worked.

“Winning came as a shock to everyone and especially with the way the last try was scored. It was a great day and an even better night after winning it with the whole club behind us and everyone on top form.

“There were a few sore heads the next day too!”

Rory Steele: “We made pretty tough work of getting to the final, every game was a tight affair especially the semi against Marr who probably should’ve beaten us.

“When the final came round I thought the boys were pretty confident. Everyone thought Melrose were going to beat us comfortably - apart from us.

“As soon as Charlie put that ball down in the corner I was right there and could see he’d managed to ride the tackle, stay in touch and get the ball down.

“I can’t remember much after that, it was all a bit manic before a big night out. Myself, Ewan and Charlie got the train back with ‘Sonians supporters and it was great fun.” 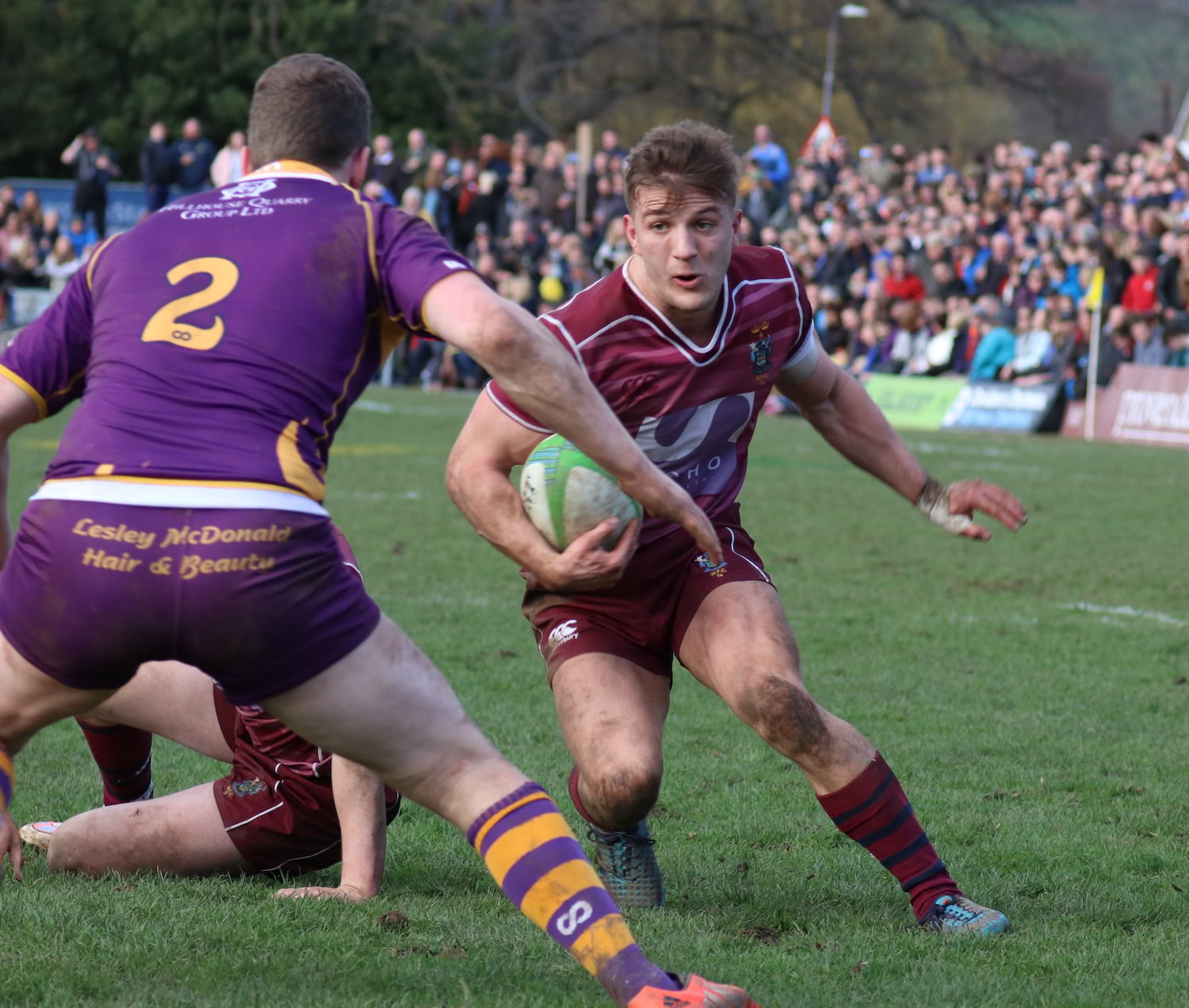