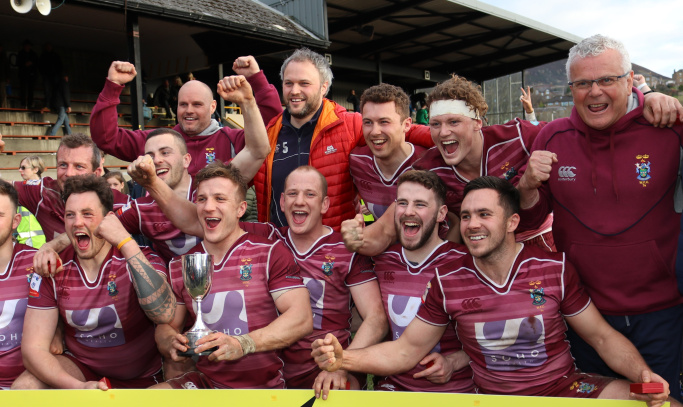 Earlier today, April 14, we heard from all 10 players who were involved as we mark two years since Ewan Miller’s group lifted the Ladies Cup in 2018 - now hear from the coaches.

The squad - made up of Miller, Craig Borthwick, James Miller, Charlie McKill, Ali Harris, Andrew Skeen, Scott McKean, Rory Steele, Ally Davidson and Willie Thomson - were delighted to be working with Mike Ker, Conan Sharman, Andrew Ker and David Harris and the club are lucky to have them.

The quartet eat, sleep and breathe sevens and have worked tirelessly, among others and many players, to make sure that Watsonians are one of the leading sevens clubs in Scotland.

This has led to many, many tournament wins and Kings of the Sevens titles - and there is no doubt that April 14 2018 at The Greenyards was just as special for them as it was for the players.

Mike Ker said: “It been a long 15s season and the previous week we lost early in the Gala Sevens the as boys were shattered having lost to Melrose in the league semi the day before, but it showed their attitude/ethos for sevens that they all trained that week for Melrose.

“We had so many players to choose from and the second VII that day with the like of Chris Scott and Jack Ferguson won at Haddington also, that shows the strength we had.

“At Melrose we had a slow start and I don’t think we really started playing sevens properly until we got a sin bin against Marr in the semi. This bit, for me, was when the players showed they wanted to win it and had the belief. This was my highlight of the day as we showed the hard work and desire to get into final and win having been 14-0 down, and when you add Charlie McKill’s track back tackle to the result I knew then we were in the right place [to win the tournament]. Skill, talent, belief yes, but also a real attitude and desire to not give in and work hard.

“In the final it was perfect sevens, it was everything we had practiced and was almost five or six years in the making.

“This group had played together over that time and been successful in every other tournament. Add Charlie and Willie Thomson and we had the right mix and balance to produce the performance we did.

“The players understood the systems we wanted to play, setting targets either side of the field, keeping the ball and forcing defensive fatigue. All our scores came from this and as a coach that was the most pleasing thing to see.

“The performance in the final was the most accurate and clinical performance I’d seen from a WFC sevens team in many years.

“In terms of the whole day’s emotions, well I never managed to win Melrose as a player - I came close - but was nice to win as a coach and felt good to give back to the club that had given me so much and so many opportunities.

“It was also just reward for Dave Harris and all the hard work he had put in over the years. As previously mentioned though it wasn’t a ‘one off’ lucky day, it was a day 10/15 years in the making, going back to all the efforts Mars [Di Rollo], Conan Sharman, Dave [Harris], Dad [Andrew Ker], JB [Jamie Blackwood], Keith Watters, myself and others put into building an ethos for the sevens game at the club.”

Conan Sharman, who won the Melrose Sevens as a player with the Barbarians in 2001 - read more here - stated regarding 2018: “What a day that was!

“I remember going into the day thinking we hadn’t had much time to prepare, but knowing that the more games we get under our belt, the better we get. We are very fortunate that we had a core bunch of guys that have played with each other for a long time and we do take the sevens circuit very seriously.

“One big thing was our defence. We’ve always worked really hard on not allowing teams to score against us and that frustrates teams to make mistakes, especially in the final against the host team in 2018.

“I knew on the day we had the experience, we just needed the composure. There were some big moments in that final, they went in our favour and we managed to get through that really tough game against a quality team, but all credit to our team.

“The final whistle is something I won’t forget, to have won a Melrose Sevens medal as a player and a coach is very rewarding.”

David Harris said: “Having turned down the opportunity to sit on the bench in 1996 at the tender age of 35, I was determined to get my hands on the elusive Ladies Cup one way or another.

“So, rather than pack it in, I turned to coaching and managing the sevens team, continuing my involvement which had started in 1978.

“Since that great team of ’96 we put together some excellent teams on the Kings of the Sevens circuit, but had never taken the chance of reaching a Melrose final, let alone winning, albeit, coming close on several occasions and even winning the Kings for the very first time in 2009.

“Despite being blessed with top class players in various squads throughout the years, some of whom were among the very best in world rugby sevens during their respective eras - the like of Darren Burns, Colin Gregor, Andrew Turnbull and Mike Fedo spring to mind - we always seemed to come up agonisingly short time after time at Melrose.

“During 2016 and 2017 we had assembled a very good squad with few changes in personnel from one season to the next. This squad played, many, many ties together, reaching finals and winning plenty over that period.

“The core of the squad was settled and they knew how to play sevens and how to win. Time after time we could field six fast players and one slow one [if you were involved in these squads you will get this one!].

“In 2017 we came so close to going all the way to the Melrose final, only to be thwarted by a missed conversion in the semi against the hosts, but nevertheless we went on to win the Kings title that season as the dominant team.

“In 2018 the squad was augmented by Charlie McKill, bringing a further injection of class to an already very good group.

“The draw for the Melrose Sevens didn’t look too bad for once and with the withdrawal of the Romanian national squad during the week of the tournament, the draw suddenly looked even better.

“The team were excited and raring to go, they were in with a good chance and were determined - there is a distinct feeling around teams at times like that, a quiet confidence without being arrogant, a belief in themselves and their fellow players, camaraderie. It was all there and it felt special.

“Like many good teams, we didn’t look particularly flash in the early rounds and consequently weren’t really in the running, according to many in the crowd and some pundits on the day at least.

“We knew different though, the mood in the squad was excellent, I could feel the players determination and they were really only doing what they had to do in the early ties.

“What many overlook is that being in the bottom half of the draw and in the final tie of the first round - as we found ourselves that year - means the ties come very, very quickly, with little rest between each.

“However, were used to it having played an extraordinary number of ties over the preceding year or so - and more often than not from a similar draw.

“All of a sudden - within less than one hour 45 minutes of starting our first tie - we were in the final, which took many a fan and pundit alike by surprise.

“Melrose fielded a very strong team on the day and were confident going into the final, with them having come through what ended up as the tougher side of the draw they were certainly favourites.

“Minutes before kick-off, I heard one pundit predict a 40 point win to Melrose, which I promptly relayed to the team during our team talk.

“What a final it was and what a result, made extra special by having a son [Ali Harris] involved.

“Special times which hopefully the club can repeat in the not too distant future, we were after all the first non-Borders, Scottish winners of the Melrose Sevens [in 1905] and have won the Ladies Cup more often than any other team out with the Borders [nine].

“A strong tradition which is worth keeping going as I hope it will.” 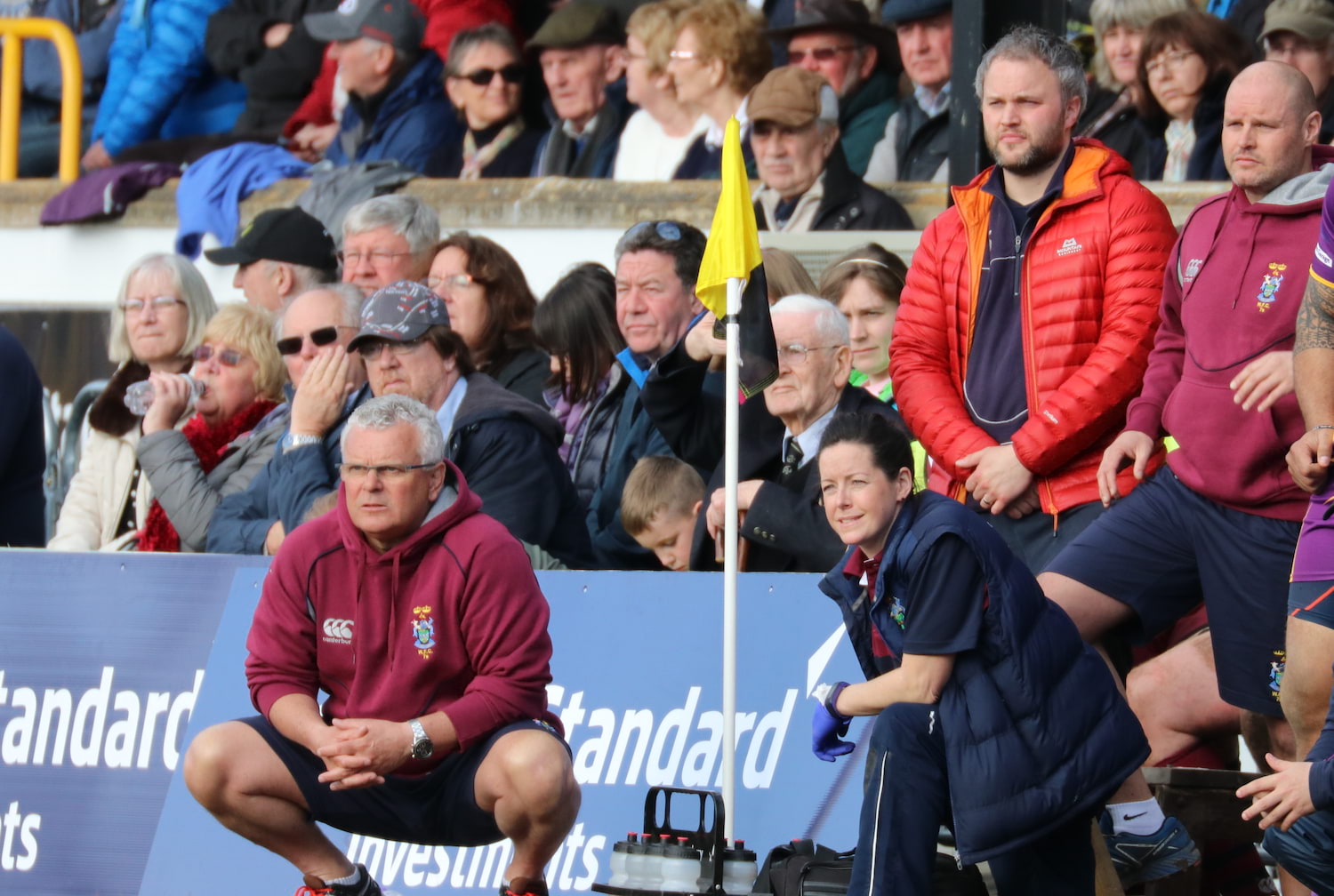