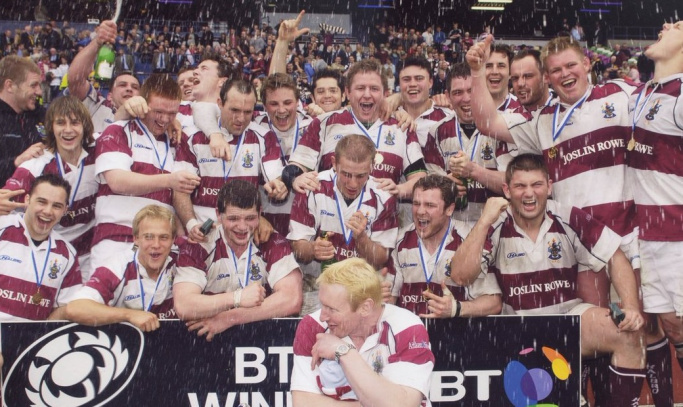 Reminisce about an amazing triumph 14 years ago…

Fourteen years ago this week was one of the best days ever in the history of the 1st XV.

Having lost Scottish Cup finals in 1996 and 2003 to Hawick and Heriot’s respectively, the squad of the 2005/06 season made it third time lucky at Murrayfield by defeating Currie 31-15 to lift the trophy at the national stadium.

It was no real surprise when, after Rennie had been held up over the line, ‘Turny’ set up scrum-half Jamie Blackwood for the first try of the game.

Try two came from captain Alan Nash, who had been playing so well since his return from injury in March, and when a third was added by Rennie without Currie having really threatened - apart from when Nash and winger Carl McWilliam teamed up to stop winger Geoff Caldwell just short - and the Cup seemed to be heading for Myreside.

Watsonians don’t like to make things easy though and with prop Paul Tait in the sin bin Currie gave themselves a bit of hope with a converted try and centre Ben Cairns, the scorer, seemed to be finding space in midfield.

Some great defensive work was put in at this stage with Steve Lawrie, magnificent on his return from a broken leg, and second-row Ian Dryburgh tackling like a demon as ever meaning Currie could only add a penalty during their spell of pressure.

Blackwood then scored a great second try to all but seal victory and set the Watsonians support into party mode. Try number five from Rennie capped a great day.

“Lifting the Cup as captain will always be remembered by me as playing for the school [George Watson’s College] then onto the club is something I am very proud of.” -Alan Nash

“Seeing how happy the victory had made everyone at the club really was the highlight for me. That's what club rugby is all about.” - Jamie Blackwood

“Seeing all the happy faces and smiles at the pavilion post match was magical. The stalwart supporters that had been there in 1996 [the loss to Hawick] could this time have a more enjoyable evening.” - Iain Sinclair

“It was brilliant to win some silverware that season and to personally play at Murrayfield for the first time.

“That season at Watsonians helped myself to get a professional rugby contract and a number of other players went on to play top level rugby.” - Bryan Rennie

“Following on from my runners-up experience in 2003 victory was indeed sweet!

“The experience was so much better second time round. The sore head the next day following the celebrations in the clubhouse was certainly worth it.” - Kian Coertze