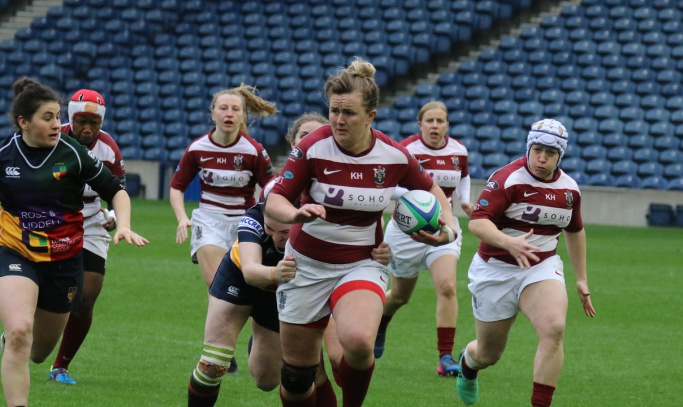 A year ago today, April 27, was one of the best days ever in the history of the WFC Women’s XV.

Just 12 months on from losing to Hillhead/Jordanhill in the final of the Sarah Beaney Cup, the group of players being coached at the time by Dave Flynn and Scott Nightingale had dusted themselves off and were back at BT Murrayfield again fighting for silverware.

In order to get their hands on the trophy for the very first time they were going to have to beat a Hills team who were going for the league and Cup double and had a sprinkling of Scotland caps in their squad.

‘Sonians’ No.8 Alice King takes up the story: “The previous year [2018] there was quite a big build up around us getting to the Cup final for the first time and perhaps we were a bit nervous about that match and took time to get used to the surrounding at Murrayfield.

“Fast forward to last year and the team was more experienced and we were more used to big game.

“We also got changed over at the old Wandies clubhouse rather than in the main changing rooms and I think that made it seem much more like just a normal game and we could really focus and just prepare on our own game plan without other distractions.

“There was a good feeling in the group as we headed out of the tunnel onto the main pitch and we were feeling pretty determined.”

Hills went ahead early on thanks to a converted Hannah Smith try - the player now playing for Watsonians - before Alice struck back with a try of her own converted by captain Nicola Nightingale.

A converted score by loosehead prop Ailie Tucker meant that the Women’s XV led 14-10 at the break and were in with a real chance of winning.

“It was important to hit back after they scored early and after I managed to get over and Ailie did too a half-time lead was pretty important psychologically,” Alice, who grew up in Dumfries and Galloway and previously played for Lismore, continued.

“The first period of the second half was very tight before we managed to score our third try by [full-back] Emma Evans and give ourselves a bit of breathing space.”

That breathing space did not last long though because Hills scored a penalty try and winger Megan Gaffney was yellow carded for her part in the incident.

That left ‘Sonians playing with 14 players for the closing stages and just four points ahead.

“Hills had possession near the end and we were defending as hard as we could, but I also got cramp in one of my legs at that point and I was hobbling about just trying to do as best I could!

“When the whistle went it was a phenomenal feeling, we had finally got the trophy we all wanted.

“To go up the stairs at Murrayfield, collect our medals and then be presented with the trophy is a moment that none of us will ever forget.

“We also had a great party that night and it was well deserved after the hard work we had put in!”

Tighthead prop Molly Wright - who has since been capped by Scotland - went on to be named player of the match, but it really was a squad effort and it was brilliant to see mother and daughter Libby and Chloe McCue part of something that special together.

The 21-17 win helped propel the squad onto becoming Tennent’s Premiership champions during 2019/20 and there is plenty more to come from this exciting group of players going forward for sure.