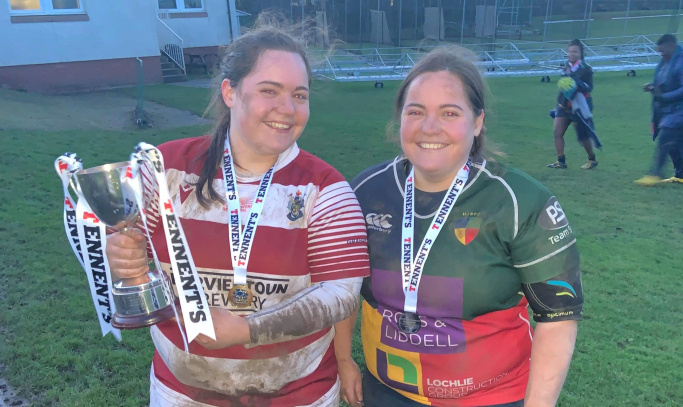 We catch up with Women’s XV player Caitlin Abernethy…

Caitlin Abernethy has taken time out during lockdown to look back on a successful 2019/20 for her with the Women’s XV.

The 25-year-old broke into the starting team at the start of the season and became a regular at tighthead prop, giving the scrum a really solid base to build from whilst causing opposition front-rows a lot of issues.

Her toughest opponent came in the Tennent’s Premiership final in December at Myreside when she was packing down directly against her identical twin sister Philippa who was playing for rivals Hillhead/Jordanhill.

“We were so used to playing with each other over the years growing up so playing against her in a league match earlier in the season and then in that final was quite surreal,” Caitlin said.

“She knows all my tricks as a tighthead and I know all hers as a loosehead, so it was just about trying to block out the fact that we are sisters and just get on with the game.

“Thankfully, we came out on top to lift the trophy, but it was a doubly special day for me because Phillipa was a part of it too.”

Caitlin is currently just over a year and a half into a trainee scheme with Audit Scotland and that is what brought her to Edinburgh in the first place in 2018.

Having played rugby for a number of years previously as well as working in the capital she wanted to play sport so she joined Watsonians in January 2019.

“The Sarah Beaney Cup run was just starting when I joined, I played one match against Kirkcaldy en route to the final and then seeing the girls win the trophy at Murrayfield that April was amazing,” she said.

“It made me determined to push for my place in the team going forward and I put in a lot of hard work during pre-season last summer to try and make that happen.”

And make it happen she did, playing in 12 of the 15 matches during 2019/20 as the team won the Premiership and started the Cup campaign well before the season was cut short in March.

“I started the first match of the season just gone and went from there,” Caitlin said.

“The hard work I had put in during the summer definitely helped while the coaches at the club and the senior players helped me and I grew in confidence and really started enjoying my rugby.”

Caitlin grew up down south and began playing rugby when she was 13, following in the footsteps of Philippa who had begun when she was nine.

“When I was that age a girls team was starting up ad they needed more numbers, so my sister suggested I headed along too and I went along to one session and loved it,” Caitlin recounts.

“We were down near Portsmouth at the time and it was a team put together by a number of local clubs - Havant, Petersfield and Basingstoke - and called the Solent Sirens

“By the time I reached my last year of under-18s rugby, Basingstoke had enough resources and players to set-up their own girls team so we all went there.

“I also played for Hampshire at county level before myself and my sister moved up north to study at the University of Glasgow.”

As soon as she arrived in Glasgow to study politics, Caitlin got involved in the student rugby club, playing regularly and becoming president in her fourth year.

“We played BUCS leagues on Wednesdays and in the Scottish club leagues on a Sunday and that was a good experience,” she stated.

“When I arrived we were around mid-table in National Two in the club leagues and by the time I left we were competing up at the top end of National One and it was a great journey.

“We also won the Bowl and the Plate events and playing on the back pitches at Murrayfield so those were memorable days.”

Caitlin spent five years studying in Glasgow, her undergraduate degree followed by a masters in political communication, and she left in 2018 before moving to Edinburgh.

Her parents now live in Kintyre and she has been based there of late working from home and training as much as she can as well as walking her dog to keep her busy.

Main image from Caitlin, other by Graham Gaw, more here