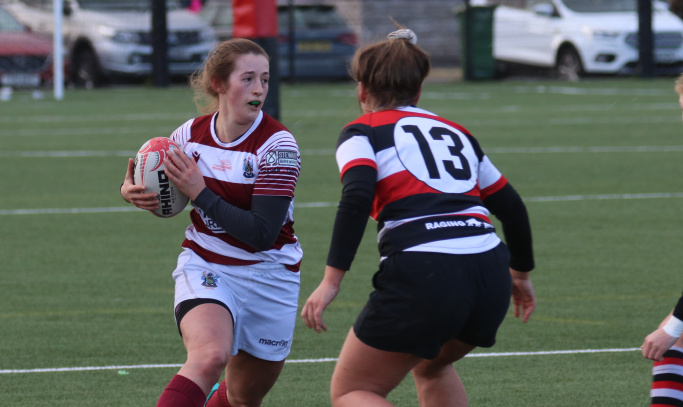 We catch up with Women’s XV player Issy Drexler…

It has been quite a journey for Issy Drexler since she moved up to Scotland two years ago.

In 2018/19 she was playing for Scotland under-20s and Watsonians and was still travelling south to where she was brought up to represent the Leicestershire county side.

A number of injuries held her back a bit that season, but she managed to represent her county team in a big final at Twickenham around the same time [April 2019] that the Women’s XV were winning the Sarah Beaney Cup at BT Murrayfield.

“It was quite a bizarre time around then because I played a massive game at Twickenham and also watched the girls playing in the final on BBC ALBA,” Issy recounts.

“Despite not being able to play as much as I would have liked for Watsonians that year everyone made me feel welcome and I was keen to head back to Myreside in 2019/20.”

During the season just gone, Issy played eight matches as ‘Sonians won the Tennent’s Premiership title and made a strong start to their Cup defence before lockdown came on March 23.

She also earned a Scotland squad call-up and was an unused replacement in the Autumn Test against Japan at Scotstoun.

“I was part of the Scotland Futures set-up at the start of the campaign and was invited in to train with Scotland a few times, but to be named on the bench was a surprise,” the hooker, who can play all across the front-row, stated.

“Although I didn’t get on it has given me a lot of confidence to take into the future and whenever I represented Watsonians I tried to do my best and make an impact on the game.”

Issy took up rugby when she headed along to a ‘come along and try day’ at Leicester Forest East RFC with her friend.

“That was just over five years ago now and the girls section grew so that we were training fairly regularly and then some of us went on to play county games for Leicestershire at under-18 level,” she explained.

“Playing for Leicestershire was a baptism of fire, but I really enjoyed it and over the next couple of years I played for the county and my club side became Loughborough Town.

“When I was old enough I moved into the senior section at Loughborough Town and that was really good while I continued playing for Leicestershire county at a senior level too.”

In her first year of senior rugby Issy was studying at De Montford University and, playing some games for them too, she certainly had a busy sporting calendar!

Whilst playing a game for Loughborough Town against Loughborough Lightning’s 2nd XV, Issy impressed at tighthead prop and a coach at that game asked her if she had any Scottish connections.

“I told them that my mum was Scottish so I was brought into the Scottish Exiles programme,” she said.

“Next I got a letter inviting me to Scotland under-20 trials and it was just before the family were going on holiday to Mull.

“So, I spent a week in Mull then got the ferry and a number of trains - I lost count! - down to Edinburgh for the trials.

“I was invited to join the under-20s set-up after that and at the time I was supposed to be going to university in Wales. I decided to start a course up in Scotland instead so I could continue my rugby as well.”

Issy began a course at SRUC: Scotland’s Rural College and that is when her time at Watsonians began. She was working during 2019/20 with rugby still taking up a lot of time.